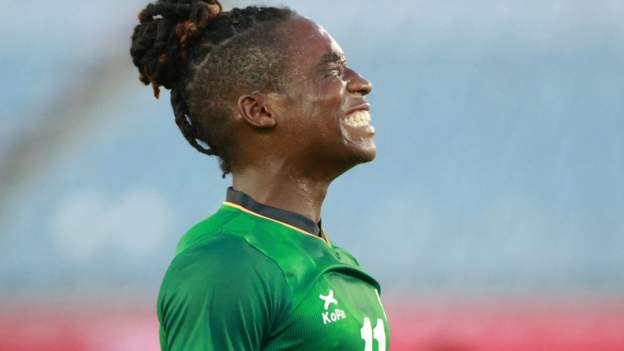 Zambia coach Bruce Mwape hopes his side can learn to cope without captain Barbra Banda at the Women’s Africa Cup of Nations (WAFCON).

After striker Banda was ruled out on medical grounds on the eve of the tournament, the Copper Queens held Cameroon to a 0-0 draw in their Group B opener on Sunday.

“This is a team sport it is not an individual sport,” Mwape said.

“We need to play as a team and whoever is present should actually play to our plan.

Banda, 22, netted back-to-back hat-tricks at the Olympic Games last year had been tipped to star for Zambia at WAFCON in Morocco.

“I’ll say the absence of our captain Barbra hurts her much,” Zambia midfielder Margret Belemu said.

“But we want to make her proud.”

Meanwhile, Zambia strikers Ochumba Oseke and Siomala Mapepa missed the game against the Indomitable Lionesses through suspension and are expected to face Tunisia on Wednesday.

“I’m sure if those players join us in the next game you’ll be able to see a difference,” Mwape added.

Elsewhere in Group B, Tunisia scored after just 15 seconds on their way to a 4-1 triumph over debutants Togo.

Mariem Houij netted for the North Africans by lobbing keeper Ame Amouklou and Sabrine Ellouzi’s header doubled the lead in the 12th minute.

Togo captain Odette Gnintegma pulled one back from the spot midway through the first half, but Tunisia took control after the break after Togo defender Omolatcho Djankale was sent off.

Ellouizi firmly met Sabrine Mamay’s free-kick to make it 3-1 just before the hour mark, and 10 minutes later Amouklou fumbled a low effort from Houij over her own line.

Meanwhile in Group A, Senegal recorded their first-ever WAFCON victory by beating Uganda 2-0 thanks to goals in each half from Ndeye Awa Diakhate and Nguenar Ndiaye.

It wasn’t plain sailing for Senegal though as Uganda twice struck the woodwork moments before each goal.

Fauzia Najjemba headed against the outside of the post from Hasifah Nassuna’s corner before Diakhete slotted home from the spot after 16-year-old striker Hapsatou Diallo was brought down by Aisha Nantongo.

Nantongo nearly made amends in the second half but her long range effort struck the bar, then moments later Yudaya Nakayenze gave possession away in defence allowing Ndiaye to race home and round the keeper to seal the win.

The Teranga Lionesses lead Group A on goal difference ahead of hosts Morocco, with both sides in action again on Tuesday against Burkina Faso and Uganda respectively.

Group C gets under way on Monday, as holders Nigeria face South Africa in a repeat of the 2018 final and Burundi take on fellow debutants Botswana.