Women’s Euros: Sara Booth and the turning point in the rebirth of Northern Ireland 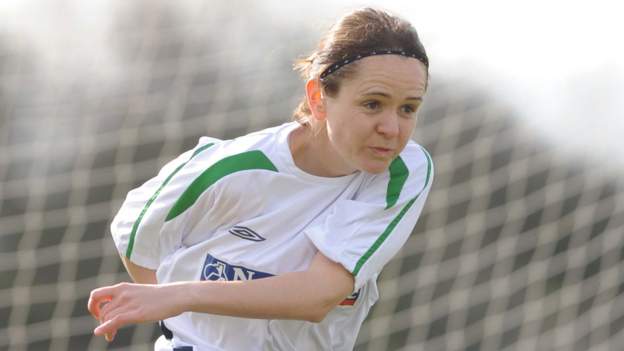 It was a trip that couldn’t really have gone much worse at the time. But it would prove to be a watershed moment in the rebirth of a Northern Ireland women’s team that would make history 20 years later.

Manager Kenny Shiels and his players will soon board a plane bound for England to take part in the Euros in what will be Northern Ireland’s first time playing in a major women’s finals.

Before they do so, Sara Booth – a former Northern Ireland captain who is synonymous with the women’s game in the country – turned her mind to an altogether different type of journey.

It was “around the Millennium” and she and her international team-mates had taken the boat from Larne to Stranraer to play Scotland in an international friendly.

“[The Irish FA] decided to get rid of the women’s national team,” Fifa’s current head of women’s competitions explained in this week’s episode of Sportsound Meets, which airs on BBC Radio Ulster at 15:00 BST on Saturday, 2 July.

“Back then we played one friendly match a year and this time we happened to be going to Scotland, having probably only trained for the game the week before.

“Scotland beat us 9-0. We played against Julie Fleeting, a top Scottish national team player who was in her prime. She scored six and I was marking her, so as I was on the boat home thinking I was horrendous and should retire from football at an early age.

“We got off the boat in Larne and the administrator with the IFA at the time said ‘look, basically we are getting rid of the women’s national senior team and we are going to invest in the youth international side’.

“We all took it that they were getting rid of us because we were so bad. You can imagine the devastation. I was only in my early 20s at the time.”

‘Callaghan and co had nowhere to graduate to’

While the women’s senior national team was essentially disbanded at that point, Booth, who retired from football in 2014, explained that the Irish FA did form an under-19 international team.

“In 2001-02 this team did really well – they actually got through the first round of the Under-19 Championships,” Booth explains.

“It was players like Sarah McFadden, Julie Nelson, some of the older players now – I think Ashley [Hutton] was just coming in at the end of that. Marissa Callaghan was there for sure.

“So we had all these talented players who are now in the current squad, and there was no outlet for them. They were going to finish at under-19s and there was no national team for them to graduate to.”

‘Losing them to the Republic was a concern’

By 2002 Booth was working for the IFA and she, along with the late Maura Muldoon, used an interesting tactic to lobby the governing body about reforming the women’s national team.

“I think Maura was at the Sports Council at the time but was chair of the Northern Ireland Women’s Football Association. She and I identified a fund that we could use and put a submission together for a pocket of money,” she continued.

“Alongside that we did two other things, the first being identifying a competition that we could play in – the Algarve Cup.

“The third thing we did was write a paper saying these players were going to go down south to [play for] the Republic of Ireland because where could they go? Their careers couldn’t stop after they finished at 18 or 19.

“There was a precedent [of players switching] and it was a concern. So Maura took it to the board.

“She managed to convince them that night to give us some money to go and play in the Algarve Cup. That was in 2004 and that was the resurrection of the Northern Ireland national team.”

‘Your heart is with this team’

Northern Ireland finished 12th out of 12 at that tournament in Portugal, but that is not the point. With the players writing to local businesses to help fundraise the £250 needed by each of them to go on the trip, it seemed a spirit and a momentum was back in the women’s senior international team.

Fast-forward to today and the likes of Callaghan, Nelson, Hutton and McFadden are the bedrock of Shiels’ history-making squad that will take on Norway, Austria and England in their Euro 2022 group games in Southampton.

Booth will be at the grounds for each of those games as a fan – she requested annual leave for those dates from Fifa a long time ago – and feels that, given the trials and tribulations faced by the sport in Northern Ireland down the years, a lot of past players, coaches and officials will feel an attachment to the 23 women selected by Shiels.

“Oh yes. Your heart is with this team,” she said when asked whether she feels part of the current squad.

“It is almost as if they have done it for the 20 or 30 years of missing out on opportunities for the rest of the women’s football community. It is remarkable.”

“We all remember those difficult times and the struggles we had to go through to get to where we are now. You recognise the journey that you have been on and it makes you stronger.

“I can certainly see that when I look at Rachel Furness, when I look at Sarah, Julie, Ashley and Marissa, even Demi [Vance] and Nadene [Caldwell] even though they were coming in at more of a golden period, I guess.

“You can tell how much it means because they have worked so hard to get to where they are today, and they realise how difficult it was when they started out. I think that is important for all of us to remember as well.”

The importance of remembering the journey. Even that awful one to Scotland.