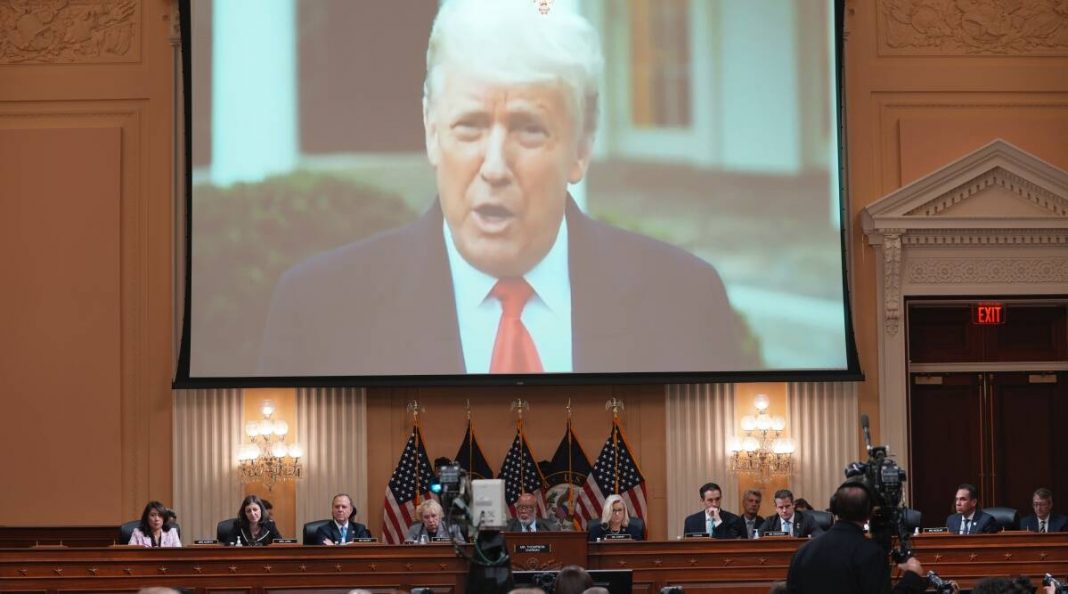 The first White House aide to testify publicly before the House committee investigating the Jan. 6, 2021, attack provided a damning account on Tuesday of how former President Donald Trump, knowing his supporters were armed and threatening violence, urged them to march to the Capitol and sought to join them there, privately siding with them as they stormed the building and called for the hanging of the vice president.

The testimony from the aide, Cassidy Hutchinson, was extraordinary even by the standards of Trump’s norm-busting presidency and the inquiry’s remarkable string of revelations this month. In fly-on-the-wall anecdotes delivered in a quiet voice, she described how frantic West Wing aides failed to stop Trump from encouraging the violence or persuade him to try to end it, and how the White House’s top lawyer feared that Trump might be committing crimes as he steered the country to the brink of a constitutional crisis.

Drawing from conversations she said she overheard in the West Wing and others contemporaneously relayed to her by top officials, Hutchinson, a 26-year-old who was an aide to Mark Meadows, Trump’s final chief of staff, provided crucial details about what the former president was doing and saying before and during the riot. She painted a portrait of an unhinged president obsessed with clinging to power and appearing strong, and willing to tolerate violence as a result — as long as it was not directed at him.

Witnesses are sworn in on the fifth day of hearings before the House Select Committee to Investigate the January 6th Attack on the U.S. Capitol in Washington on Thursday, June 23, 2022. (Jason Andrew/The New York Times)

“They’re not here to hurt me,” she testified that Trump said as he demanded that security checkpoints be removed outside his rally on the Ellipse on Jan. 6, knowing that many of his supporters were armed and threatening violence. “Take the f-ing mags away. Let my people in. They can march to the Capitol from here.”

It was an act of vanity by Trump, who wanted his crowd to appear as large as possible, that recalled his first day in office, which was consumed by his false claims about the size of the crowd at his inauguration. Hutchinson recounted it as she laid out a day of chaos in the White House, in which the president’s top advisers sought to rein him in and Trump pressed repeatedly to join up with his supporters.

She recalled being told of one particularly dramatic moment in which an irate Trump tried to grab the wheel of his vehicle from a Secret Service agent when he was told he could not go to the Capitol to join his supporters, an account that the former president quickly denied and that Secret Service officials said would be rebutted in forthcoming testimony.

The revelations, over a two-hour hearing, tied Trump more closely to the violence that disrupted the certification of President Joe Biden’s victory, raising fresh questions about whether Trump could face criminal charges for his actions on Jan. 6. At the end, Rep. Liz Cheney, R-Wyo., the panel’s vice chairwoman, hinted at yet another potential area of liability, suggesting that Trump and his allies could be engaging in an effort to tamper with witnesses and obstruct the committee’s work. 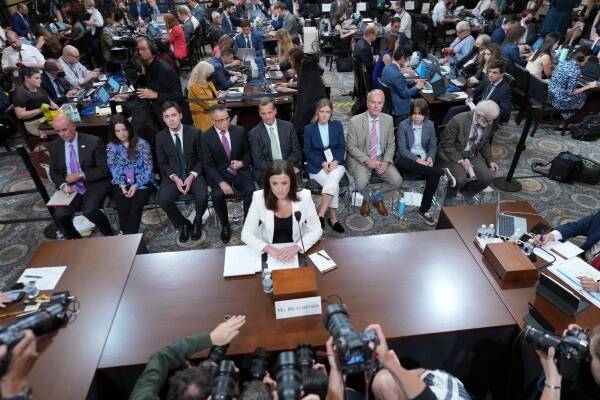 Cassidy Hutchinson, who worked for former President Trump’s chief of staff, returns to testify before the House committee investigating the Jan. 6 attack on the Capitol on Capitol Hill in Washington, June 28, 2022. (Doug Mills/The New York Times)

Hutchinson testified that Trump’s anger had become so uncontrollable in the weeks after the 2020 election that when he was told in December that Attorney General Bill Barr had said publicly that there was no widespread election fraud, Trump threw a plate in the West Wing, shattering it and leaving ketchup dripping down a wall.

In the days leading up to the attack, she said, White House aides were concerned that Trump might be breaking laws against obstructing justice and impeding a congressional proceeding. On the day of the attack, Trump rebuffed efforts by aides and family members, including his daughter Ivanka, to put out a statement telling the mob to stand down. Instead, he posted a tweet attacking Vice President Mike Pence, who the committee has said came within 40 feet of the rioters at the Capitol.

“Mark, we need to do something more,” Hutchinson said she heard the White House counsel, Pat Cipollone, tell Meadows, when he came rushing into her office as Trump’s supporters entered the Capitol. “They’re literally calling for the vice president to be f-ing hung.”

“You heard him, Pat,” she said Meadows responded. “He thinks Mike deserves it. He doesn’t think they’re doing anything wrong.”

Hutchinson said that in the days after the siege, Trump’s personal lawyer, Rudy Giuliani, and Meadows discussed seeking pardons with the president; neither received one.

Her testimony elicited praise for her willingness to speak out against Trump and was compared to some of the most consequential moments in presidential history. John W. Dean III, whose testimony during Watergate rocked the Nixon presidency, compared Hutchinson’s appearance to the stunning moment in 1973 when Alexander Butterfield, another Nixon aide, revealed in a Senate hearing the secret taping system that would lead to the president’s downfall. 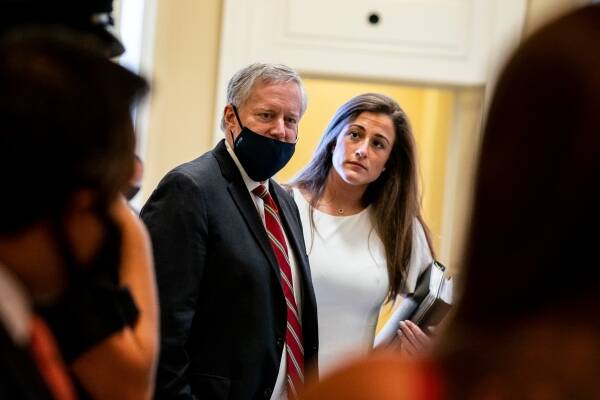 “Cassidy met the Butterfield standard with instant gratification,” Dean said. “It took a long time to learn the content of the tapes. Here we learn immediately what she heard and observed.”

No hearing had been scheduled for this week. But on Monday, the committee put out a cryptic news release saying that a witness with new information had come forward and would testify on Tuesday, touching off suspense and speculation about who it might be.

Hutchinson recently sat for a fourth interview with the committee, and, with new counsel advising her, informed the panel of previously unknown information that lawmakers felt needed to get out quickly, according to a person familiar with the committee’s work. More so than previous witnesses, the panel had also grown concerned for her security, and lawmakers decided to try to keep her planned testimony quiet for as long as possible, the person said.

The committee’s first four hearings this month had focused on Trump’s efforts to overturn the results of the 2020 election, during which he sought to wield his presidential power to pressure the Justice Department, state officials and Pence to help him stay in office. But the session on Tuesday focused almost exclusively on Trump’s conduct, revealing how, as the White House learned of a potentially violent effort to disrupt the peaceful transfer of power, the president not only failed to intervene, but appeared to be cheering it on.

In Cheney’s closing remarks, she read aloud from testimony given by two witnesses whom she declined to identify, in which they spoke about having been pressured by Trump’s allies to withhold information from investigators.

“They have reminded me a couple of times that Trump does read transcripts,” one witness told the committee.

Another witness, Cheney said, told the committee that a Trump ally said Trump wanted the witness to “know he’s thinking about you. He knows you’re loyal and you’re going to do the right thing when you go in for your deposition.”

Cheney said such attempts raised questions about whether Trump was engaged in ongoing criminal conduct.

“I think most people know that attempting to influence witnesses to testify untruthfully presents very serious concerns,” she said.

Dozens of Trump administration officials and aides have testified privately before the committee, and video and audio clips of what they told investigators have been a central part of the hearings. But until Tuesday, no official who worked directly for Trump in the White House had sat before the committee to give live, nationally televised testimony. 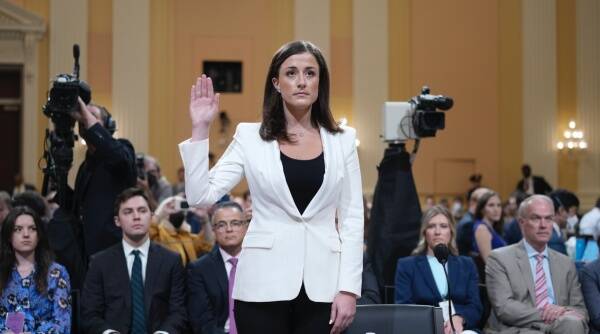 Cassidy Hutchinson, who worked for former President Trump’s chief of staff, is sworn in to testify before the House committee investigating the Jan. 6 attack on the Capitol on Capitol Hill in Washington, June 28, 2022. (Doug MIlls/The New York Times)

After the hearing, Hutchinson was immediately surrounded by a phalanx of news photographers who had been documenting her every gesture as she sat, alone at a witness table, facing the committee. At times during her testimony she seemed nervous, but she appeared to gain confidence as she testified. By the end, the panel’s chairman praised her courage, and made an appeal to other witnesses to follow her example and speak out.

“If you’ve heard this testimony today and suddenly you remember things you couldn’t previously recall, or there are some details you’d like to clarify, or you discovered some courage you had hidden away somewhere, our doors remain open,” said Rep. Bennie Thompson, D-Miss., chair of the committee.

Hutchinson said Meadows was worried as early as Jan. 2 that Trump’s rally could get out of control — “Things might get real, real bad on Jan. 6,” she said he told her. She testified that Anthony M. Ornato, the former White House chief of operations, warned Meadows on Jan. 6 that the crowd seemed ready for violence, and had knives, guns, bear spray, body armor, spears and flagpoles.

She said Meadows appeared unmoved by the information, only asking Ornato whether he had informed Trump, which Ornato said he had.

Later, Hutchinson described being within earshot of Trump as he demanded that his supporters be able to move around the Ellipse freely even though they were armed. 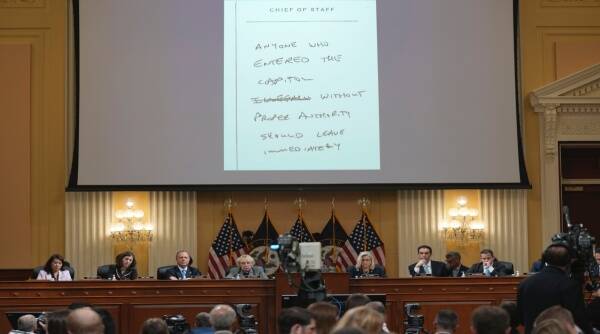 A note written on Jan. 6 by Cassidy Hutchinson, who worked for former President Trump’s chief of staff, is displayed as she testifies before the House committee investigating the Jan. 6 attack on the Capitol on Capitol Hill in Washington, June 28, 2022. (Haiyun Jiang/The New York Times)

As the mob began to descend on the Capitol, Hutchinson said she heard Trump insist on going to Capitol Hill to join them. When Cipollone heard of the prospect, she testified, he objected. “We’re going to get charged with every crime imaginable,” Hutchison said Cipollone told her.

Hutchinson said members of the president’s Cabinet were distressed enough by the assault on the Capitol and the president’s encouragement of the mob and refusal to intervene that they quietly discussed invoking the 25th Amendment to remove him from office. The ignominious prospect of being the first president to be subject to the amendment was one of the reasons he agreed to record a video on Jan. 7 committing to a peaceful transfer of power, she said.

Trump responded angrily to Hutchinson’s testimony, using profanity and calling her “disgraceful” and a “phony.”

But she told the committee she was doing her duty, speaking out against what had happened on a dark day in American history. She said she had been particularly dismayed when, as violence raged at the Capitol and the mob chanted, “Hang Mike Pence,” the president had attacked Pence anew on Twitter.

“As an American, I was disgusted,” she said. “It was unpatriotic. It was un-American. We were watching the Capitol building get defaced over a lie.”