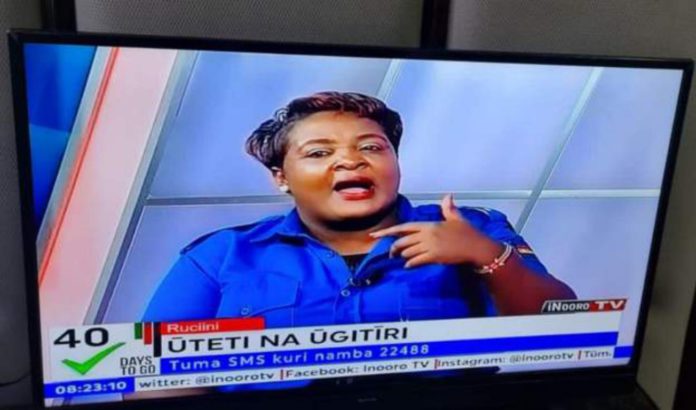 A Kenyan woman, who is reportedly an aspiring politician, has been arrested after allegedly pretending to be policewoman while appearing as a panellist on a television show.

The suspect, identified by police as Monica Wamaitha Gitau, was in full police uniform during the talk show on Wednesday morning on a vernacular station.

Police rushed to the TV station, after “doubting the credibility” of Ms Wamaithai, who was a panellist on the breakfast show

Neither the suspect nor the station, Inooro TV, have commented on the allegations.

“She is currently assisting with investigations for the offence of impersonating a police officer,” police said in a tweet

Police say she is a candidate for a parliamentary seat – woman representative for Nairobi county – in the elections scheduled for August.

During questioning she said she had been a serving officer until her retirement in 2011, the AFP news agency reports

A website for an organisation Women in Security Kenya

says she had worked “as an Administration Police Officer”.

The police force urged media houses to conduct due diligence on officers before inviting them for interviews “to avoid similar incidences in the future”.

In 2013, Joshua Waiganjo was charged after allegedly pretending to be an assistant commissioner of police for five years.

He was said to have sacked and recruited police officers in Rift Valley province during this time.

Mr Waiganjo was acquitted in May 2020 by the High Court. The prosecution has appealed against the verdict.