Lee Johnson: On Hibernian, Sunderland and fondness for Bristol City 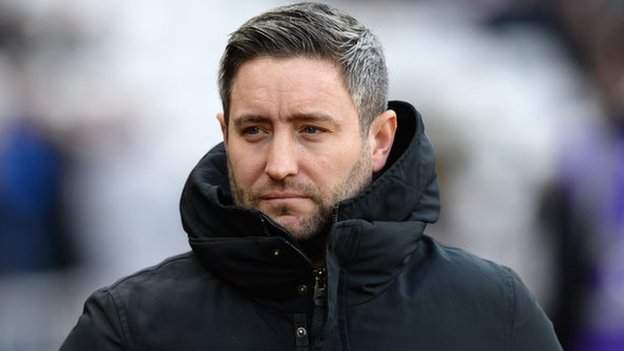 Lee Johnson believes the standard of Scottish football can progress further, as he prepares for the new season with Hibernian.

The former midfielder ended his playing career at Kilmarnock in 2013 and also spent time with Hearts.

Johnson believes his understanding of the “intensity” of the Scottish game will stand him in good stead.

“I think it’s as it should be now. Hearts got relegated a couple of years ago but have got promoted, Rangers had their troubles and then got back into the top tier and now the big guns are in Europe and doing well. The national side becomes key as well,” Johnson told BBC Sport.

“I do believe there’s an opportunity to raise the standard of Scottish football, particularly with GB status and everything that goes along with that. There’s potentially five places in Europe next year, if you can be successful.

“For me, I’ve played there and I understand it. I understand the intensity of the goldfish bowl that is Scottish football and there’s a really good standard as well.

“The top six, seven teams are as good as any that you’ll find, certainly in the Championship.”

Johnson spent almost 15 months as manager of the Black Cats and the team sat in third place in League One when he was let go in January. He was previously manager at Bristol City between 2016 and 2020, a team were he was also a player.

Hibernian finished eighth in the Scottish Premiership table this season.

“It’s quite funny when you lose your job and nobody speaks to you for four months and then all of sudden, you get a job and you’re absolutely bombarded with agents’ calls.

“But it’s nice. If you like working, it’s good to be in the mix, it does get hectic, it does get busy. But at the same time, that’s the pressure and that is the privilege to be at such an iconic club, such a big club, particularly in Scotland. I’m really happy to be there.

“It’s a beautiful city, Edinburgh. I’m a bit of a history geek, myself, so I like to study areas and the cities and the fans, and everything that goes with a particular football club. So I’m looking forward to learning a lot more about the capital.”

“I actually think Jamie’s a manager in his own right now and he would absolutely be ready to go if a manager’s job came up but, of course, at the same time, that could benefit myself and Hibernian bringing someone like that in for staff.”

Sunderland’s promotion to the Championship

“When you lose your job, two points off the top [of the table], it’s hard to take. But of course, I’ve gone public and said that there’s always things that go on behind the scenes and sometimes you’re aligned, sometimes you’re not.

“On that particular occasion, it was a bit of a crescendo of not being aligned and that’s where it led.

“Of course, 90% of those players I’d signed or re-signed and had worked really hard to bring those guys in so naturally, you’re absolutely delighted for them. The staff also at Sunderland, a lot of these guys have been there 15, 20 or even 25 years so you do build rapport. They’ve been trodden on for the last six or seven years and I’m just delighted for them. I hope they all get a really big raise.”

Lessons from the Black Cats

“There were just so many successes in there. I suppose the only regret is not having the opportunity to see it over the line. Is that a learning? Not really, because I stuck to my values, I stuck to my principles, as you know I always will, and if that’s different or it changes opinion from where the ownership is.

“I have to respect that because it’s their football club.”

“My daughter’s in school in Bristol and was born in Bristol so it’s always going to be a place that’s close to my heart.

“It’s the same with Bristol City. You don’t spend 10 years at a club and not have an affiliation and look for their results, and check on them.

“It’s difficult. When you put everything into a job and then you lose your job, for whatever reason, it’s not easy. I think everybody watching this will resonate with that in some shape or form.

“But at the same time, a lot of the young players, you see them coming through the academy. It’s been brilliant to see the likes of Antoine Semenyo coming onto the scene.

“Andi Weimann – we signed him for £1.5 million as a wide player and turned him into a nine and a half, and this year, he’s scored 22 goals and assists as well. I’m delighted for him.”