Oisin McConville: Armagh can ‘dare to dream’ of All-Ireland final 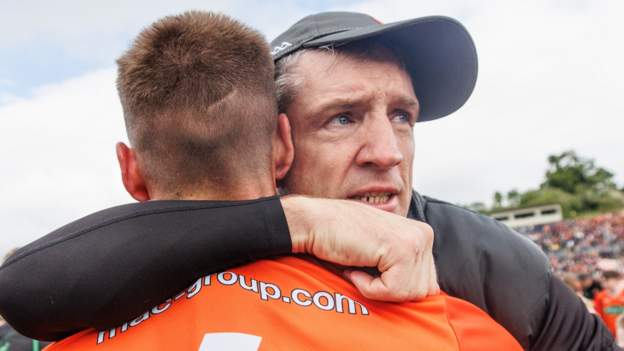 BBC analyst Oisin McConville says Armagh are one of four sides in one half of the All-Ireland quarter-finals draw who can “dare to dream” of securing a place in the final.

“Those four on that side of the draw will see this as an unbelievable opportunity to at least get to an All-Ireland final,” said McConville.

There could be an all-Ulster semi-final if both remaining provinces win their quarter-finals, while the other side of the draw is stacked with heavy-hitters like Kerry, Dublin and Mayo.

Galway were beaten Division Two finalists in the Football League and have beaten Mayo and Roscommon, among others, on their run to the All-Ireland last eight.

“Galway are a bit like Armagh in that their six forwards from 10 to 15 are very capable and cause a lot of problems,” the 2002 Armagh All-Ireland winner told BBC Radio Ulster’s Sportsound Extra Time programme.

“Whichever defence can nullify their opponents best will go a long way to deciding the outcome,” he added.

Armagh booked their place against the Tribesmen at Croke Park by hammering Donegal 3-17 to 0-16, a scoreline which represented a 14-point swing from the last meeting between the Ulster counties.

“Even the most optimistic Armagh fan would have thought it is a game we could realistically win but a lot of things would have to go right in order for us to do that.

“We had an unbelievable start with a goal after 10 seconds but Donegal responded with six great scores from play and they were on top with the Armagh defence looking in trouble.

“The game turned on two short kick-outs, one leading to Shaun Patton being sent-off and from that point when the ball went into the net from the penalty Armagh bossed it and played on their terms.

“Donegal lacked a lot of fight and effectively ‘downed tools’ with 20 minutes to go and there was only one winner from there on.”

“Armagh have been a bit starved over the last 14 or 15 years so even to get to a quarter-final is a sign of progression.

“There is a significant belief about what is going on and there is a continuity in terms of a manager who has been in place for eight or nine years now, a good backroom team and a group of players who are prepared to express themselves.

“Their best form of defence is attack and Armagh, when they are putting pressure on the opposition kick-out, that is when they are at their best.

“You’ll see that from Armagh from now on. There may be question marks over other areas of the pitch but up front they are a match for anyone.

“It’s about keeping on improving and if the trajectory remains on an upward curve who knows what can happen.”

Kieran McGeeney’s men have attracted significant support from across the Orchard county as they continue their bid for All-Ireland success.

“It is a very effective mix when everyone is in unison and the support is immense.

“People are talking about 15,000-odd people from Armagh on Sunday and that can increase.

“By the time we get to Croke Park in a couple of weeks hopefully we can double that and fill Croke Park with orange. It’s been too long since we’ve seen that.”

You can listen to the full interview with Oisin McConville on Sportsound Extra Time on BBC Sounds.