Thousands swept up as Kremlin clamps down on Ukraine war criticism 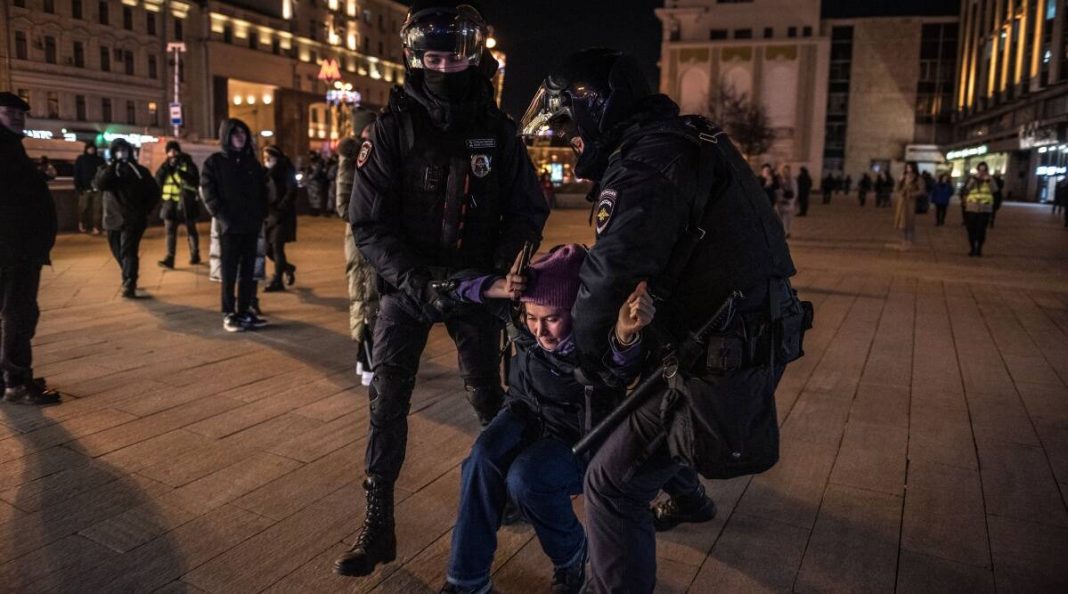 Vladimir Efimov, a local politician on the Kamchatka Peninsula in Russia’s Far East, was charged with “discrediting the army” and ordered to pay a $500 fine three times in recent months over anti-war images that he displayed on social media.

When he continued, reposting battlefield pictures like the wholesale destruction of the Ukrainian port city of Mariupol under Russian bombardment, prosecutors ratcheted up the charges and accused him of a felony — punishable by up to five years in prison or stiffer fines.

“They thought that I would be afraid,” Efimov said, that the fines “would give me cold feet and make me hide away.”

Three months ago, President Vladimir Putin signed into law draconian measures designed to silence war critics, putting even use of the word “war” off-limits. They prompted some Russians appalled by the invasion to flee the country, forced independent news outlets to shut down and created a climate of suspicion in which neighbour turned on neighbour.

While the laws initially led to a few, highly publicised cases, it is now becoming clear that local prosecutors nationwide are applying them with particular zeal.

At least 50 people face prison sentences of up to either 10 years or five years hard labor, or fines of as much as $77,000, for spreading “false information” about the military. More than 2,000 people have been charged with lesser infractions, according to a human rights organisation that tracks cases nationwide.

The charges piling up against activists, politicians, journalists and ordinary Russians in big cities and remote towns, from Kamchatka in the Far East to Kaliningrad in the west, provide a stark gauge of how the Kremlin has intensified the repression of those who criticise the war. 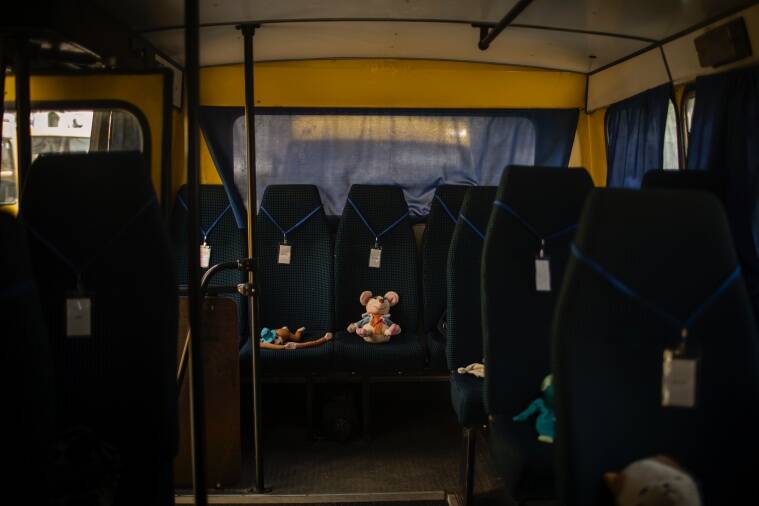 In a symbolic act against the Russian invasion, a school bus without children and full of stuffed animals drives around the center of Lviv, Ukraine. (The New York Times file photo)

“Clearly, the goal was to have a chilling effect on the public and on any critical voices against the military operation,” said Pavel Chikov, head of the Agora Human Rights Group, which tallied the cases and has helped to defend some of the accused. “To a certain extent it was successful, because people are kind of cautious about how they express their opinions.”

The two laws address slightly different actions. The harsher one criminalised deliberately spreading “false information” about the military, interpreted as anything outside the official version of events. If the actions cause undefined “grave consequences,” the sentence goes up to 15 years’ imprisonment or an $80,000 fine.

The second outlawed virtually any protest or public criticism of the war as potentially “discrediting” the military, in a kind of “three strikes” law. It carries fines for the initial incidents, while repeat offenders face criminal charges that carry prison sentences of up to five years or financial penalties. To date, four criminal cases have emerged from among the 2,000 charged, but the numbers are expected to rise, Chikov said.

“If we talk about cases involving freedom of expression, I would say it is the highest number ever,” he added.

With the first criminal cases only now coming to trial, it remains unclear how harshly judges — generally prone to toe the Kremlin line — will treat defendants.

Defence lawyers are not optimistic. “I would like to hope that the courts will be just and they will listen to our arguments,” said Marina Yankina, the lawyer for a freelance journalist in southwestern Siberia whose trial started Wednesday. “But I have been working for a long time, and unfortunately it is not going to happen.” 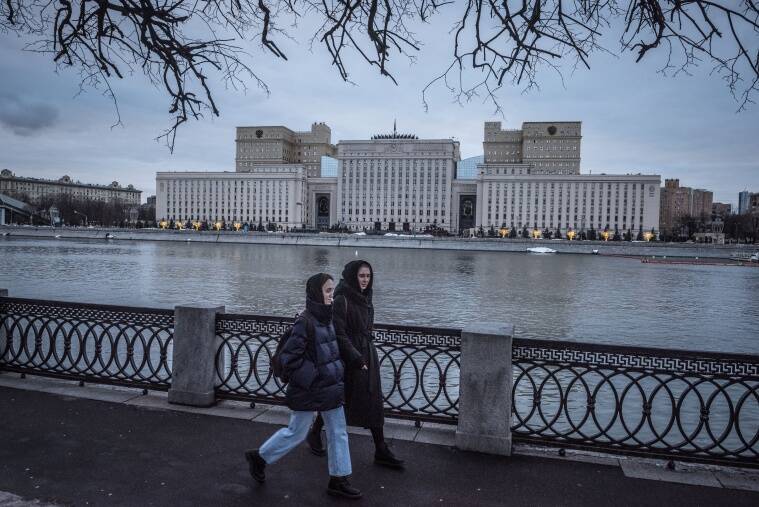 A building of the Russian Defence Ministry in Moscow. (The New York Times file photo)

The charges against her client, Andrei Novashov, 45, from a small city called Prokopyevsk, are a case in point. Novashov said he was surprised at being accused of spreading “false information” over five social media posts, including a repost from a well-known photojournalist about the Russian military destroying a maternity hospital in Mariupol.

Officers began breaking down his door at 6 am as if he were “some drug dealer or pimp,” he said. Like most defendants, Novashov was barred by the judge from using the internet or his phone, but he was able to speak to a local podcaster.

“It is impossible to keep silent,” Novashov said, while noting ruefully that people around town had mostly reacted to his case with indifference. He added: “People have been taught that nothing is going to change, so the less you know, the better you sleep.”

In an echo of Stalinist times, the new laws have galvanised people to turn in their fellow citizens. After Aleksei Gorinov, 61, a local politician in Moscow, publicly criticised Victory Day events for children when Ukrainian children were dying, five Russians reported him to law enforcement, said his lawyer, Sergei N. Telnov.

Authorities started the case against Gorinov on April 25, took him to jail April 27 and issued an indictment May 1, Telnov said, adding that “it is super fast.” Gorinov was accused of spreading false information, including calling the conflict a “war,” since officially it remains a “special military operation.”

In letters to supporters from pretrial detention — where he said he initially slept on a cement floor in an overcrowded cell with suspected thieves and drug dealers from Central Asia — Gorinov wrote that Russia had reached a sad state when someone who criticised a war faced 10 years’ imprisonment.

Supporters on Wednesday flocked to the start of his trial, which was live-blogged by a reporter from Mediazona, a website that covers court cases. “A man is judged for his opinion,” Gorinov said, speaking from the metal courtroom cage where Russian defendants are kept. “When else will you see this?” 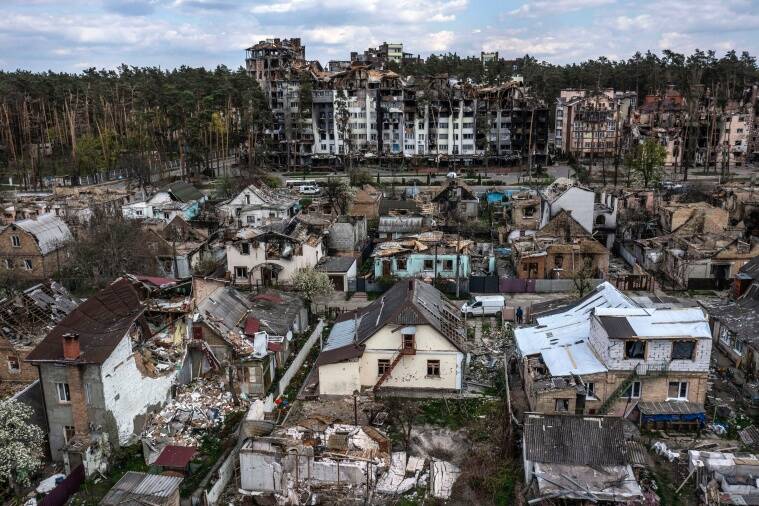 Houses, and buildings are in ruins at Irpin, a suburb of Kyiv Russian attacks. (The New York Times file photo)

In one of the first sentences to be handed down, a court in the Zabaikalsky region, near the border with China, fined the administrator of a social media channel called “I Live in Ruins” about $16,000 this week after he was accused of posting forged documents and videos that contained false information about military operations in Ukraine, according to a local website, Chita.ru.

Chikov said the new laws were modelled on those devised during the pandemic, when the government banned spreading information about Covid-19 that it had not approved. But only nine people have been prosecuted in two years, he said.

It does not take much to be accused of “discrediting” the military. Russians have been prosecuted for wearing workout clothes and even nail polish in the blue and yellow colours of the Ukrainian flag, lawyers said. A lawyer in Kaliningrad defending a client faced the same charge herself after using the word “war” in her arguments.

The vague language of the laws gives prosecutors wide flexibility in bringing charges, while defence lawyers wrestle with how to respond. Defence lawyers said that investigators basically compared what the defendants said with reams of transcripts from briefings by the ministries of Defence and Foreign Affairs.

Anything not in the briefings or denied by officials is treated as a lie, said Vladimir V Vasin, a defence lawyer. “If they write that something is green, it means that it is green, and if they write something is red, then it is red, and everything else will be untrue,” he said.

Vasin is defending Mikhail Afanasyev, editor of online magazine New Focus, which covers the Republic of Khakassia in southern Siberia.

Afanasyev has been held in pretrial detention since April 14 for writing a story called “The Refuseniks” about the dreadful conditions — including a perpetually drunk commander, no food and terrible battlefield organisation — that prompted 11 members of Rosgvardia, the Russian national guard, to decline to fight.

The journalist believed that he was just doing his job, Vasin said, but was charged because what he gleaned from interviews was not in the official briefings.

The swelling case list across Russia indicates that prosecutors realised that Moscow wanted results, lawyers said. “There is a feeling that there is a directive to push the cases to the court as soon as possible,” Chikov said. “Everyone immediately understood that this was of the highest political priority.”

Still, the constant flow of new cases signalled that the laws have not silenced all opposition, he added.

His anti-war posts were not criticising the military, he said, but the mass “hysteria” in support of the war. Efimov vowed to continue despite the criminal charges. “Sit there, shut up and praise the president. This is what it is about,” he said.