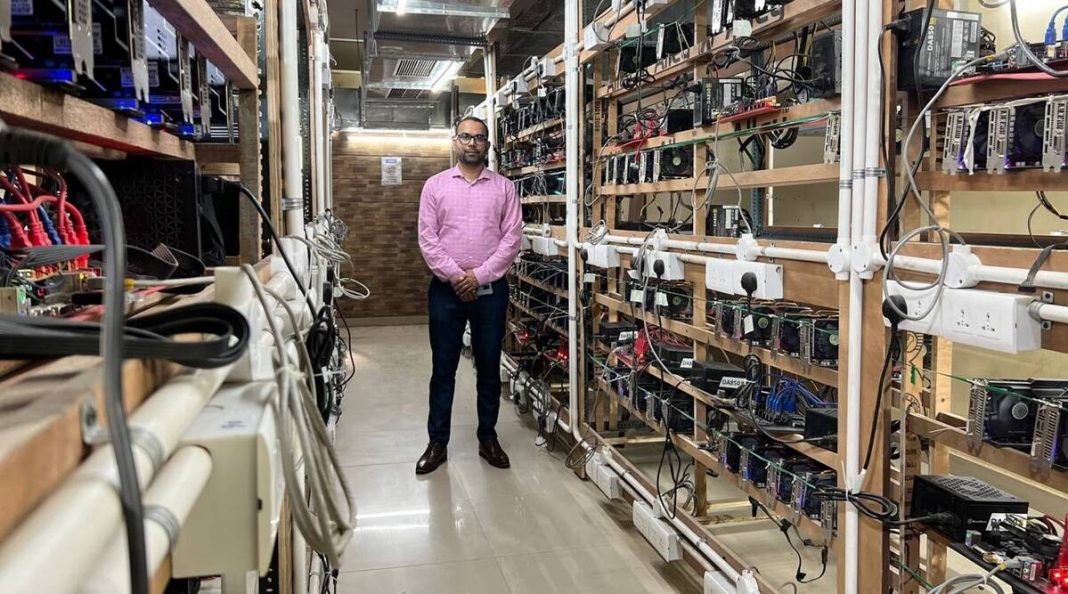 Tucked away in Haryana’s Rohtak is an emerging modern-day gold mine. But instead of excavators and shovels, there are hundreds of computers, or “mining rigs”, that work in sync to extract Ethereum, the second-largest cryptocurrency globally.

Welcome to New Edge Soft Sol Pvt Ltd, founded by Pardeep Narwal who decided to try his luck with crypto mining from his home in October 2020 after struggling to keep his business of providing online infrastructure to colleges afloat during the first Covid lockdown.

The 34-year-old gave The Indian Express a rare peek into the elusive world of cryptocurrency mining, opening the doors to his 24-hour operation inside a three-storeyed building manned by three engineers in eight-hour shifts, with 300 high-end Graphics Processing Units (GPUs) — and an average monthly electricity bill of Rs 3 lakh.

“The image often touted of miners is of stealing electricity from the grid or enormous fossil fuel plants, which is far from the whole truth. The public opinion around crypto mining understandably relies on this image, as incomplete as it is,” Narwal said.

In India, regulatory uncertainty coupled with security concerns has made mining an extremely secretive business. “Several crypto miners that operate on a large scale in India either have imported crypto mining hardware illegally or are stealing electricity to run their rigs, which is why they want to be out of the public eye,” Narwal said.

Crypto mining is a decentralised process of validating transactions on a blockchain network. For verifying each transaction, miners receive a reward which is where the profits come from.

Narwal gives an interesting analogy to understand crypto mining. “For instance, say Ram sends Rs 100 worth of Bitcoin to Shyam. If Shyam denies receiving it, miners come to Ram’s rescue by validating the transaction on the blockchain distributed database. Every transaction has to be verified by crypto miners, therefore miners can also be termed as validators,” he said.

Crypto mining is a decentralised process of validating transactions on a blockchain network. (Express photo)

To become a miner, you need a computer, preferably a high-end device that is capable of verifying transactions all day. A new block is added to the blockchain every 15 seconds on average, which adds up to thousands of transactions each hour.

According to Narwal, in terms of units, his energy-intensive plant consumes 35,000 units per month. “We have made arrangements with our local electricity distributors to make sure that there is no electricity disruption… Buying a power supply back-up requires additional infrastructure cost, which won’t do us any good,” he said.

The GPUs are essentially graphic cards, originally designed for gaming but are also the best fit for mining cryptocurrencies. “All the GPUs I own have been bought from India. While most of the miners buy from China, I only buy these devices within the country,” Narwal said, adding that one GPU costs him anywhere between Rs 60,000 and Rs 1,20,000.

The Rohtak rig consists of multiple 4G connections: a broadband connection, a private optical fibre connection, and two other devices that work on LAN, so even if one is down, others will function. “The speed of the connection does not matter as much as latency. We have ensured that multiple connections are working in sync so that the plant works constantly without any stoppage,” Narwal said. 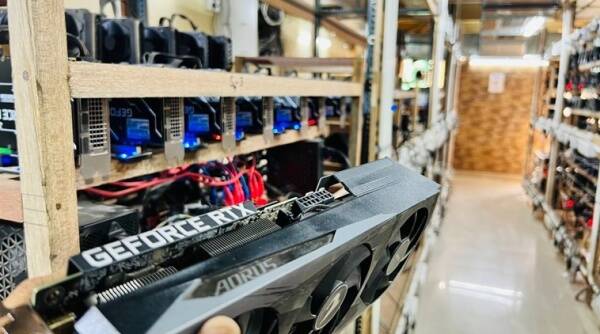 More than setting up the plant, ensuring that it runs every day is the real challenge, according to Narwal. “Regular GPU and Ethereum miner software updates, and monitoring every GPU, is the challenge,” he said.

“Compatibility is a major issue, all the GPUs need to work in sync,” said Jyotirmay Ray, 27, one of the engineers at the rig. “We also need to continuously check for dusting, so that the devices are functioning properly.”

Interestingly, the plant does not have an air-conditioner. Instead, it has air-coolers placed on the roof with a high-end exhaust system to remove excess heat. “We can’t afford to put in ACs, it could cost us more than our initial investment, so we are using air coolers instead, but they are as effective,” Narwal said.

Like every other crypto project, Narwal’s rig is also wary of scams. “The other day I woke up only to find that my earnings were transferred to a different crypto wallet. I had to immediately turn on two-factor authentication. Some days, hackers try to hack my clipboard, so that when I paste my wallet address, the malware would subtly change it to its own private wallet…since it happens in the clipboard, most people wouldn’t even notice the change between copying and pasting,” he said.

When asked about his earnings, Narwal said it depends on the price of crypto assets, in this case Ethereum. Last month, with 300 GPU devices, which means 13 Gigahash in computational power, the entrepreneur was able to mine as many as seven Ethereum coins, or approximately Rs 11 lakh — the current mining reward is 2 Ethereum per block verified plus fees. 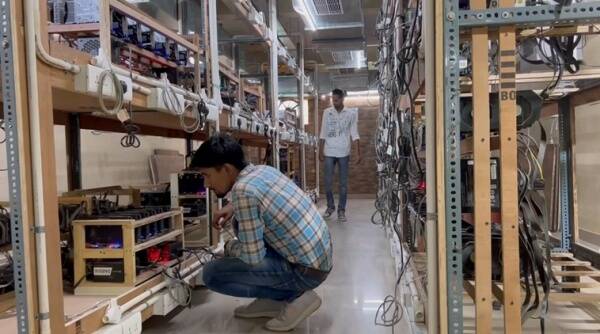 Like every other crypto project, Narwal’s rig is also wary of scams. (Express photo)

On the larger issue of cryptocurrency and regulations, Narwal believes crypto is as legitimate as any other IT business. “We pay GST for all our devices and pay the electricity bill as well. After that, we are subjected to 30 per cent tax, which we fully comply with,” he said.

He is also not worried even if the Government imposes a blanket ban on crypto. “As a rule of thumb, you can expect a GPU to lose a maximum of 30 per cent of its value, and my initial investment has already been paid back,” he said. “(But) crypto is unstoppable.”