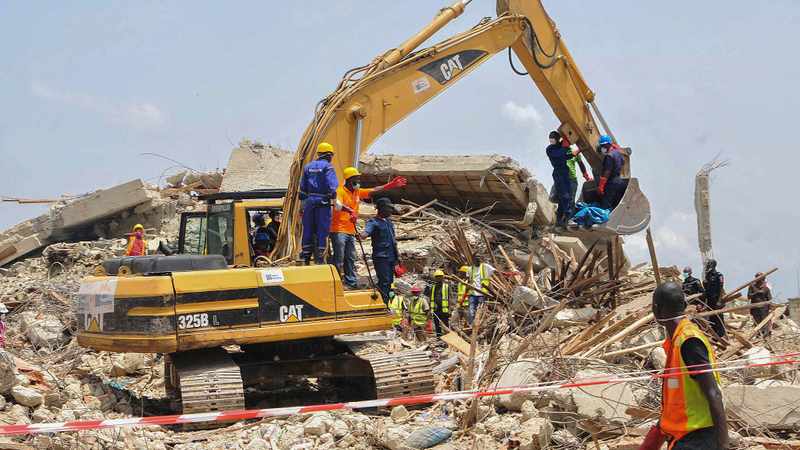 Five people have been rescued and emergency workers have been digging through rubble to find survivors.

The site being built in Lagos Island is thought to have caved in during heavy rainfall.

According to Nigeria’s Punch newspaper, the Lagos State Government has vowed to prosecute the missing developer, identified as “Fumble”, who was said to be in charge of the three-storey building that collapsed and killed four labourers on Alayaki Lane, Freeman Street, Lagos Island, Lagos State.

It has been reported that the developer went into hiding after the building caved in and also injured five labourers, who emergency responders rescued alive from the rubble on Saturday.

The State Commissioner for Information and Strategy Gbenga Omotoso said the developer would be prosecuted for his actions, adding that the collapsed building was not approved, reports Punch.

“It will be recalled that the building under construction caved in, in the afternoon, during the downpour and this led to rescue operations to commence immediately, with four persons rescued and two bodies recovered at 9.22 pm on Saturday,” according to Ibrahim Farinloye, the Coordinator, National Emergency Management Agency (NEMA), Lagos State Territorial District, citing a quote by Vanguard .

Between 1974 and 2019, over 221 buildings have collapsed across various Nigerian cities and more than half of the collapses occurred in the economic hub of Lagos, writes the Brookings Institute.