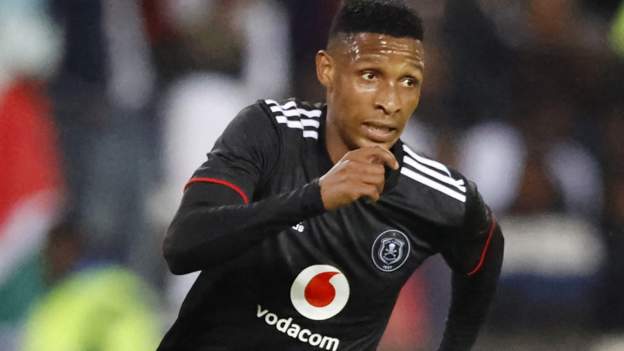 Orlando Pirates goalkeeper Richard Ofori hopes his side can brush aside their underwhelming domestic form and become the first side from South Africa to win the Caf Confederation Cup.

The Buccaneers, who lie seventh in the Premier Soccer League and made early exits from two domestic knockout competitions, take on Moroccan club Renaissance Berkane in Friday’s final in Uyo, Nigeria (19:00 GMT).

Clubs from Morocco and Tunisia have dominated Africa’s second-tier continental club competition since its launch in 2004, winning 11 of the 18 finals – with Berkane victorious in 2020.

Pirates, meanwhile, won what is now the African Champions League back in 1995 but lost on their sole appearance in the Confederation Cup final in 2015 to Algeria’s Entente Setif.

“Pirates have had a poor domestic season and the only trophy we can win is the Confederation Cup,” Ghana international Ofori said.

“Supporters remember only winners and that is why we must succeed. The 1995 heroes are fondly remembered. We want to achieve the same status.”

The Soweto-based team also want to avenge a heavy defeat to another Moroccan side in last season’s quarter-finals as they lost 5-1 on aggregate to Raja Casablanca.

“That was a huge stain on Pirates’ proud record in Africa,” Ofori said.

“There will be no repeat, We are going to Nigeria to win the final.”

Pirates edged past Libya’s Al Ahly Tripoli 2-1 on aggregate in the last four, while Berkane overcame TP Mazembe of DR Congo – who won the competition in 2016 and 2017 – 4-2 over two legs in their semi-final tie.

“We do not underestimate Berkane, especially after they scored four goals to eliminate TP Mazembe,” Ofori added.

“I appreciate Mazembe had a player sent off in the second half – but when last did any club in Africa score four against Mazembe?”

Berkane’s main threat could be through Youssef El Fahli, whose five goals, including a brace against Mazembe, make him his club’s leading scorer in the Confederation Cup this season.

Known as the Orange Boys because they hail from the citrus-growing northeast of Morocco, Berkane lost to Zamalek on penalties in the 2019 final but returned a year later to beat another Egyptian club, Pyramids.

Berkane are coached by former DR Congo boss Florent Ibenge, and midfielder Mamadou Lamine Camara says the Congolese has boosted the side since his arrival at the start of the season.

“He is really a great coach who helps the player to work and progress technically and tactically,” Camara, 19, told the Confederation of African Football website.

“And on the pitch, the team has many internationals who are used to playing at a very high level.”

Camara moved from his native Senegal to join Berkane this season, and hopes he can crown his first season in North Africa with silverware.

“We will face a great team, a big name in African football, Orlando Pirates,” he said.

The advantage for us is that this is a team that plays good football. The best team will win and we are lucky to have players with this experience in our squad.

“This is my first international experience, it would be wonderful to complete it with a continental title.”

Uyo’s 30,000-capacity Godswill Akpabio International Stadium will host the game, which will be refereed by Janny Sikazwe.

The Zambian garnered international attention when he blew for full-time early in an Africa Cup of Nations group game this year, but Sikazwe said his error was because he was suffering from heatstroke.

The winners will receive $1.25 million and appear in the Caf Super Cup against the African Champions League winners, while the runners-up will get $625,000.