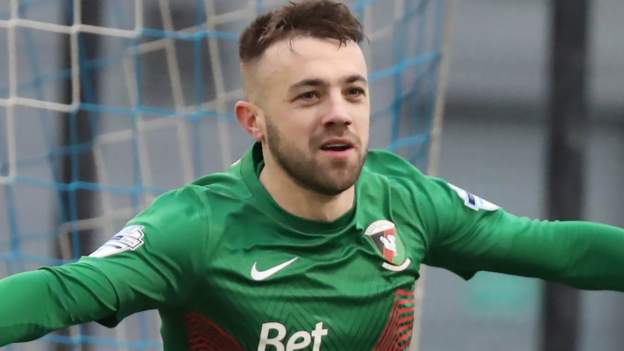 Glentoran winger Conor McMenamin has been included in the Northern Ireland squad for a four-day training camp this week.

With a number of senior players still involved in club action, it is a youthful 26-man panel that is meeting at St George’s Park on Monday.

McMenamin, who had an excellent season in the Irish Premiership with the Glens, is the only player in the squad not to have represented Northern Ireland at any level previously.

The training camp is part of Baraclough’s preparations for his side’s four Nations League games in June.

He had said previously that the camp will provide an opportunity to assess the fitness levels of regular squad members and to bring players from both the Under 21s and Under 19s into the senior set-up to see how it operates.

“It will enable the younger players to showcase what they’re all about and increase their experience of international football with the senior team coaches and players,” he explained.

Northern Ireland have been relegated to League C of the Nations League and open their Group 2 campaign against Greece at Windsor Park on 2 June before playing Cyprus away three days later.

Northern Ireland then face another away fixture, against Kosovo, on Thursday 9 June before their fourth fixture at home to Cyprus three days later.