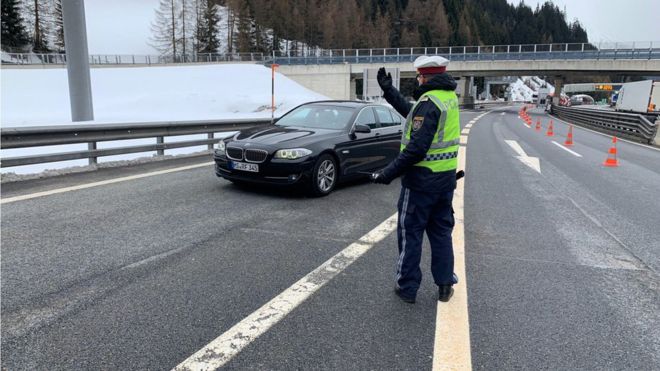 Austria has announced a ban on Italians entering the country unless they carry a medical certificate, in an attempt to stop coronavirus spreading.

Speaking after the Italian government-imposed travel restrictions across the country, Chancellor Sebastian Kurz said Austrians returning from Italy would have to self-isolate for two weeks.

Austria has seen 158 cases of coronavirus so far.

Mr Kurz said the number was still very low but the disease was deadly.

Austria and Italy share a border north of Italy’s South Tyrol region. On Tuesday, South Tyrol, in common with the rest of Italy, closed all cultural centres and restricted access to bars and cafes to daytime hours.

Italy’s nationwide lockdown limits travel to those with “verifiable work requirements or situations of necessity”. All sporting events have been suspended, and schools and universities have been shut until 3 April. Employees have been urged either to work from home or take annual leave.

Hotel and tourist accommodation operators in South Tyrol have ended their winter holiday season early and agreed to delay the spring tourist season.

What do the Austrian measures mean?

As well as barring Italians from entering the country, “regarding Austrians in Italy, we are currently organising repatriation of these Austrians”, Mr Kurz told reporters in Vienna.

Five mobile teams began health checks on the Brenner Pass as well as two other routes between the two countries on Tuesday.

Austria is introducing further restrictions. University teaching is being suspended, as well as indoor events involving more than 100 people and outdoor events with more than 500.

“The fewer social contacts there are, the better prepared the hospitals will be,” said Mr Kurz. The health minister said Austrians had to change their lives for the next few months.

How is the lockdown working in Italy?

Many of Italy’s cities were described as quiet on Tuesday. Bars and restaurants in Rome were open but there were few tourists around.

Prime Minister Giuseppe Conte has urged Italians to stay at home, and the effect on the nation’s cultural life has been immediate.

Gyms, cinemas, swimming pools and schools have closed, and the Serie A football championship has ground to a halt, but public transport is still operating.

In a decision that appeared to go against the grain of the Italian measures, Pope Francis urged Catholic priests to visit people infected by the virus.

“May they accompany healthcare professionals, volunteers in the work they are doing,” he said during a Mass for visiting clergy at the Vatican.