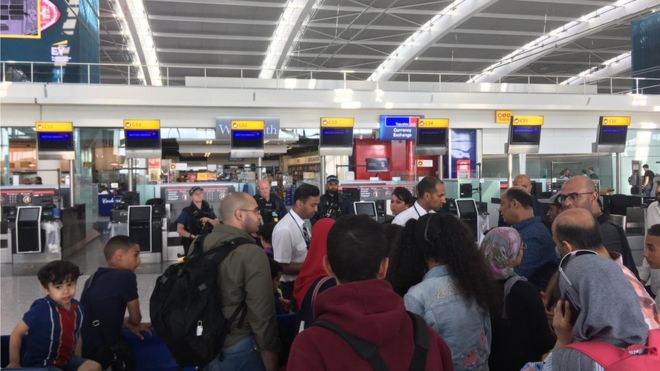 British Airways has cancelled all flights to the Egyptian capital Cairo for a week as a security “precaution”.

Passengers about to board a BA flight to the city from London’s Heathrow Airport were told that it was cancelled – and that there would be no alternative flights for a week.

The airline did not specify what the security issue was.

A spokesman for Cairo airport told the BBC the airport had yet to be notified by BA of any such changes.

A BA spokesman said: “We constantly review our security arrangements at all our airports around the world, and have suspended flights to Cairo for seven days as a precaution to allow for further assessment.

“The safety and security of our customers and crew is always our priority, and we would never operate an aircraft unless it was safe to do so.”

German airline Lufthansa also cancelled flights to Cairo on Saturday. However, flights to the city would resume on Sunday, a spokesman said.

‘Handled badly’
Christine Shelbourne, 70, from Surrey was due to go to Cairo for a week on Saturday with her 11-year-old grandson. She said she managed to check into the flight at 1500 (1400 GMT). However, her boarding card wouldn’t open the barriers.

She said: “The check-in staff reissued my boarding pass and I tried again but that didn’t work either and we were told to try again in half an hour.

“Whether they knew anything I don’t know, but my husband told me the flight had been cancelled before they did. There were no suggestions or help from staff about alternative flights.”

“My 11-year-old grandson is heartbroken – he’s been looking forward to the trip for months. We’re just not going now,” she added.

“It was handled badly to be honest. My grandson is currently looking for flights for us – he’s devastated.”

One passenger named Dan said the airline had given customers £5 food vouchers “meant to last 24 hours”.

Michael Khalil, 42, from Guildford says he is about £1,200 out of pocket as a result of his flight being cancelled.

He was booked on the flight earlier on Saturday but ran to Terminal 2 and used his own money to book onto another flight.

Mr Khalil works in training and development. He says he has an important business meeting on Monday and told the BBC: “I have no choice. I have to be there.”

Safaa Almaghrabi was due to fly to Cairo on 24 July with her husband and six children for her sister’s wedding on 26 July.

The 31-year-old says she cannot find any direct flights. When there were some available earlier on Saturday, they were more than £35,000 for the whole family.

She told the BBC: “We contacted British Airways and they had two nonsense solutions. The first was to book us a flight on the 31st July, the earliest flight they can. And this way we’ll miss the wedding.”

They also offered her a full refund which she says is “really disappointing and unfair.”

The only indirect flights she can find are via Dubai, and Jordan which she said “will be horrible for six kids.”

She said: “I cannot afford to go but I have to go.”

The UK Foreign Office updated its advice for Britons travelling to Egypt.

The advice includes the warning: “There’s a heightened risk of terrorism against aviation. Additional security measures are in place for flights departing from Egypt to the UK.”

Following the bomb explosion that destroyed a Russian airliner over Egypt’s Sinai peninsula in October 2015 after it had departed Sharm El Sheikh airport, the UK was one of a number of countries to temporarily suspend flights to and from the country.

The Foreign Office continues to advise against travel to certain parts of Egypt.