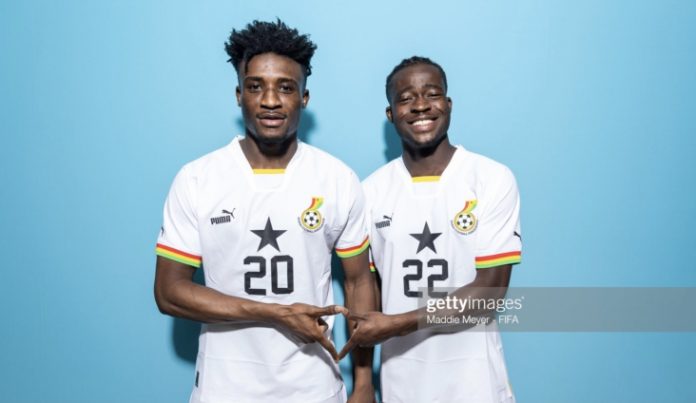 Black Stars players, Mohammed Kudus and Kamaldeen Sulemana are still earning the admiration of Ghanaians despite the team’s early exit from the 2022 World Cup.

The two have been spotted serving fashion goals as they step out together.

In the photo which has set fans drooling, Kudus was seen in camouflage trousers with a black T-shirt and jacket.

Kamaldeen on the other hand wore white trousers and a t-shirt coupled with a matching jacket.

Both players complemented their outfits with white sneakers but Kudus had a touch of red in his.

They gave off onlooking poses for the camera in the photo which has attracted love from a section of Ghanaians.

Kudus Mohammed was Ghana’s best player at the Mundial, while Kamaldeen Sulemana was restricted to two substitute appearances in the games against South Korea and Uruguay after recovering from an injury just before the tournament started.

Ghana midfielder, Salis Abdul Samed, is, however, convinced the two have the potential to lead the Black Stars’ resurgence after the World Cup heartbreak.