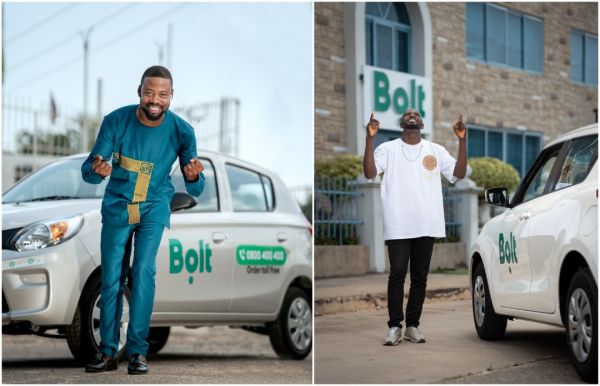 “One of these brand-new cars will be mine,” Vincent Amoah said out loud to himself.

He was on a routine drive passing through Abelemkpe in Accra. In fact, he had driven dozens of Bolt riders through that route in the last month. But when Vincent Amoah saw the brand-new Suzuki Swift and Suzuki Alto parked across the street at the Bolt head office in Ghana, something inside him snapped.

The first thing you would notice about Vincent is his smile. He laughed readily and even looked shy sometimes. Anyone who knew him, however, knew that he was passionate about the things he loved and had a larger-than-life personality.

A few days earlier, Vincent – formerly a driver for one of the companies at the Kotoka International Airport before switching to Bolt full-time – had received the same notice the thousands of Bolt drivers had received. It said that the company would be rewarding two of its most hardworking drivers in Accra, Kumasi and Takoradi, with new Suzuki vehicles. As he waited at the red light, dreaming of owning one of them, he realised that seeing the car for the first time made it more real for him.

Each time a trip took him past the Bolt office, he confidently repeated the thought to himself, “One of these cars will be mine.”

Driving with Bolt has been rewarding for Vincent. In 2019, in a bid to maximise his earnings, he quit his job and moved to Bolt. “I used to earn about GHS 700 a month,” Vincent remarked. Though in his 20s and without a wife or children of his own, Vincent still had family responsibilities. His salary just was not enough.

The first week he drove a Bolt, he earned about GHS 300. He laughed as he said, “You mean, after only one week, I’ve earned almost half my salary?” If there was any doubt in his mind, his mind was made up. “Imagine how much I can make if I work even harder,” he noted.

And work hard he did. But, of course, Vincent’s life would never be the same again.

Not even the car problems he experienced a year into his Bolt career could derail him. Getting a new vehicle on a work-and-pay basis put him back in business. Today, Vincent earns about GHS 2,400 every week. He said with a mischievous wink, “Can you believe I sleep on a king-sized bed? From just a mattress. Levels are changing.”

As he received the keys to his fresh Suzuki Swift with the cameras flashing, he was smiling but deep inside, the former company driver was thinking about what it took to get there. It was normal to start work at 6am. He would leave his home at Westlands and retire to bed at 11:00pm. If it was to be his full-time job, he would do everything he could to be as successful as he could be.

Across from him receiving the keys to the second car was Ebenezer Adu of Sokoban Wood Village in Kumasi, dressed in a green Kaftan reserved for special occasions like this. He had come with his wife and three-year-old son to pick up his prize of a Suzuki Alto. “My wife is my best friend. I couldn’t come and take this prize without her.” Indeed, the chemistry between husband and wife was evident. They kept no secrets, not even the fact that he had once earned GHS 13,000 in a month driving for Bolt.

For Ebenezer, his family is everything. That, however, does not mean he spent all his time with his family. In fact, when Bolt announced that they would be rewarding top drivers, it became a weekend ritual for Ebenezer to work almost nonstop from Friday to Sunday without coming home. Not that his wife minded. She knows how hard he works for the family and supports him fully. And now, he owns a new car as payback for stretching himself to new limits.

A former taxi driver, Ebenezer counts the 21st of December 2020 as the day a new life opened to him. After a few years of watching other taxi drivers at his station ditch their taxis for Bolt, he also decided to take his destiny in his hands with Bolt.

Exactly one week after starting on Bolt, Ebenezer was staring at the figure in the driver app: over GHS 1,500. “That was what I earned in only one week?” he asked his wife. He could not believe his eyes. They were thinking the same thing. That was the last time he drove a taxi. So he said to her, “If it means I’ll even work all day, I’ll do it.”
That pledge to his dear wife has brought his average earnings to about GHS 2,000 each week after buying fuel, making it all worth it.

To the two drivers, they realised that the key to their success would be sheer hard work and maintaining a positive work ethic. Ebenezer said, “I don’t take trips offline, tell riders to pay higher prices, nor cancel rides. All these things affect my Bolt driver scores.” No wonder his ratings are constantly between 85 and 95.

“Sometimes, a few riders can be rude, but I’m not rude back to them,” Vincent said. “I know why I’m doing this job.”

As Bolt continues to unroll new features, top drivers like Vincent and Ebenezer are adapting their work to take advantage of the opportunities they present. From safety features that keep drivers safe to Call-A-Bolt – where customers without internet access can call a toll-free number and still get a ride to their destination – Bolt is making it easier for drivers to concentrate on their core function of carrying riders across their cities.

Looking back at the day his wish came true, Vincent could not believe it. Since he had worked hard for the reward, the life-changing phone call seemed almost surreal to him. He needed a guarantee. But now, that white Suzuki Swift is his.
With a smile, he said, “You know how Accra is. 99% of my problems have been solved by Bolt. You can start small if you have a driver’s license, but you’ll have to work hard to beat me.”

Both drivers exerted themselves, and their efforts are paying off. Ebenezer said, “The most I have received in a day has been almost GHS 1,000. The money is my encouragement. I will give out my first car to another driver to begin his Bolt journey.”

And that is what Bolt is doing, changing lives from just an app. Bolt continues to reward hardworking drivers and roll out new features and partnerships to make the Bolt experience rewarding for drivers and riders alike.

To start your way to winning rewards as a driver with Bolt, visit partners.bolt.eu/driver-signup to sign up.
En