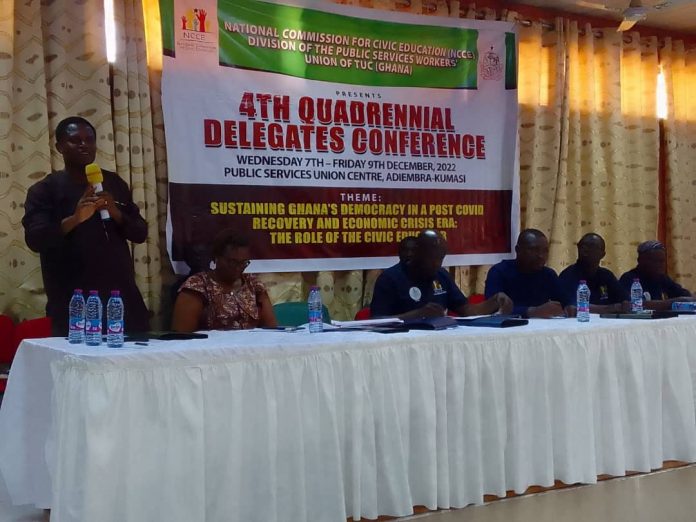 Kumasi, Dec. 8. GNA – The Public Services Workers Union (PSWU) of the Trades Union Congress (TUC) has called on the government to reconsider its decision to freeze public sector employment for the year 2023.

Mr Bernard Adjei, General Secretary of PSWU, who made the call, said there was the need for the government to give mandate to certain key public institutions such as the National Commission for Civic Education (NCCE) to recruit staff to replace those going on retirement.

This would help ease the work burden on staff of the Commission, who were already working under severe conditions and limited resources.

Mr Adjei made the call at the 4th quadrennial delegates’ conference of the NCCE division of the PWSU in Kumasi.

It was held under the theme: “Sustaining Ghana’s democracy in a post Covid-19 recovery and economic crises era: the role of the civic educator.”

Mr Adjei stressed the need for the government to resource the NCCE adequately to enable it to effectively deliver on its mandate of educating the public on government policies and programmes as well as helping to inculcate civic responsibilities in the populace to help sustain the country’s democracy.

He said the Fair Wages and Salaries Commission had not been unfair in dealing with issues related to institutions specific allowances for public institutions under the union.

Mr Adjei said the leadership of PSWU would soon embark on another round of negotiations with the Commission to make sure that the affected public institutions were treated fairly in their demands for better conditions of service.

He mentioned the PSWU’s implementation of a four-year strategic plan with eight thematic areas, which include social protection and membership welfare.

Among them are the PSWU Fund and the PSWU Mutual Insurance Scheme, which aimed at providing financial and healthcare needs of its members.

Mr Justice Awittor, NCCE Divisional Chairperson of PSWU, urged workers of NCCE to come together and work towards finding solutions to some of the challenges facing them.

He also called on them to work hard and make their impact be felt on society as civic educators to bring positive change in the Ghanaian society.