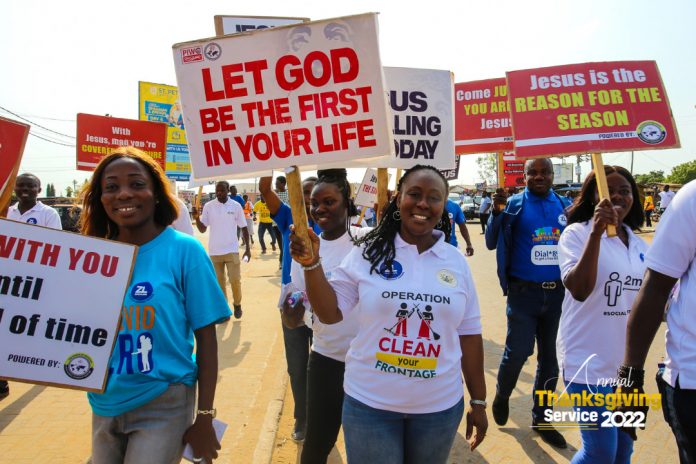 As part of efforts to give hope to Ghanaians in these trying times, the Jospong Group of Companies (JGC) and Zoomlion Ghana Limited (ZGL) used their Annual Thanksgiving Service (2022), to reach out to lost souls and win them for Christ. 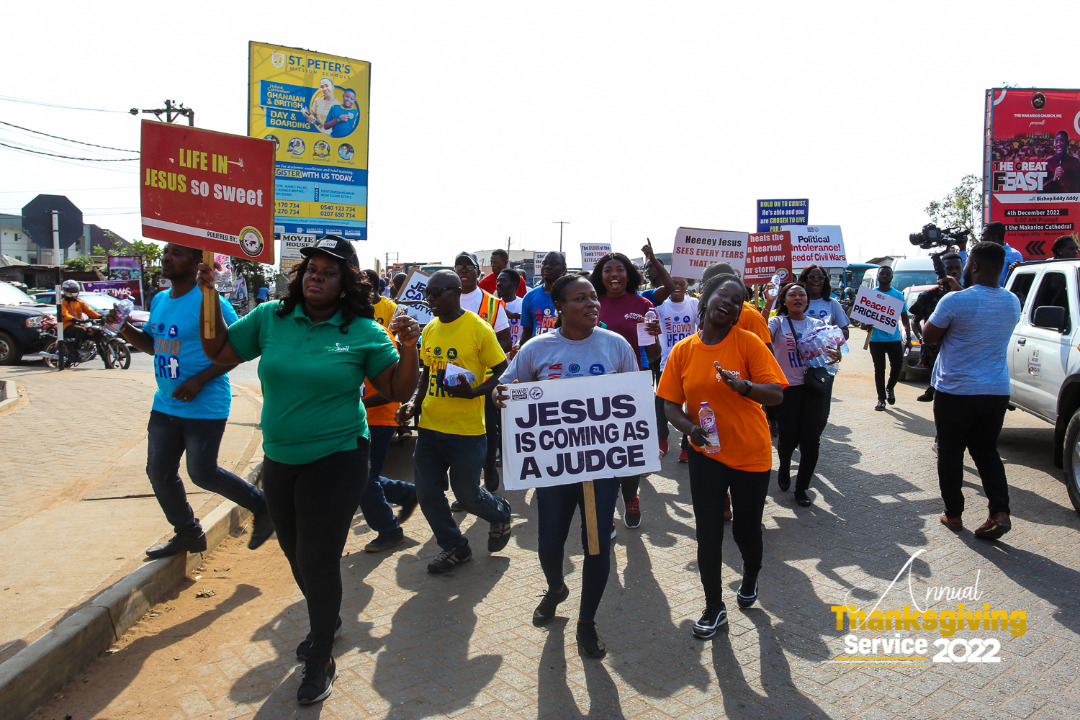 As a directive from the Executive Chairman of JGC, Dr. Joseph Siaw Agyepong, staff members of JGC and ZGL on Thursday, December 8, 2022, marched onto the streets to speak to people about the unfailing love of Jesus Christ.

The evangelism programme, which began from the group’s premises through to the School Junction end of the main Ashley Botwe-Nmai-Dzorn in Accra, saw the participants interact with people on the streets, homes and in vehicles about the saving grace of Christ. 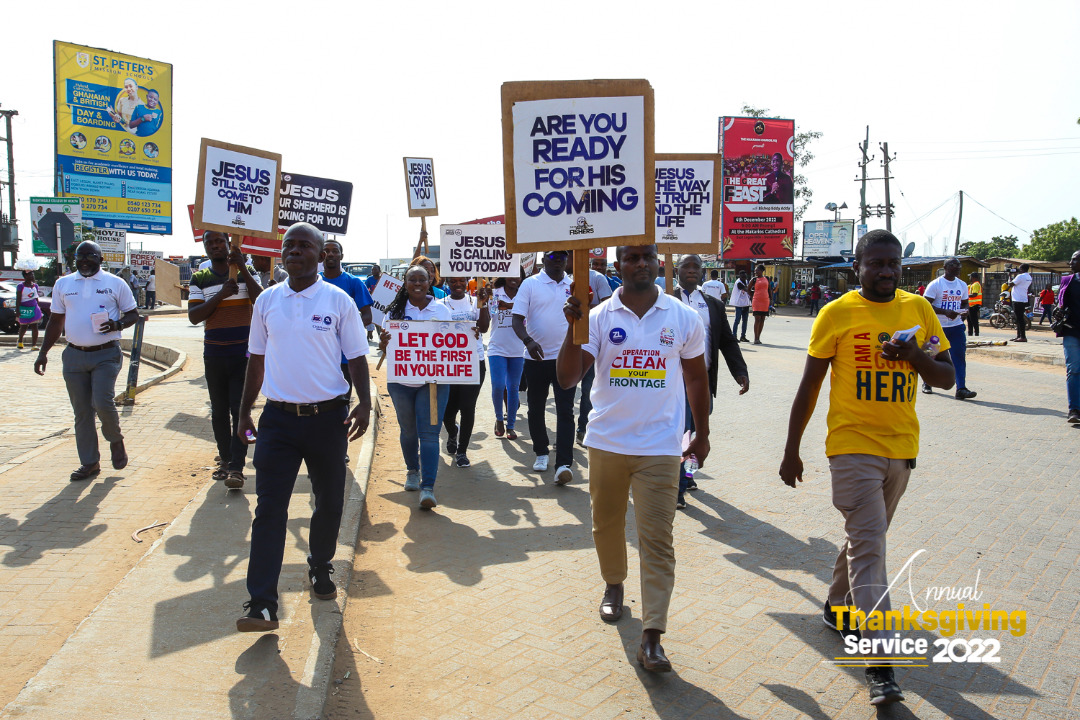 Many who received the good news were excited about the fact that Christ is the centre of the JGC and ZGL.

Speaking in an interview with the media on the essence of the programme, the Chief Corporate Communications Officer of JGC, Mrs. Sophia Kudjordji, said the outreach was meant to remind Ghanaians that all hope was not lost. 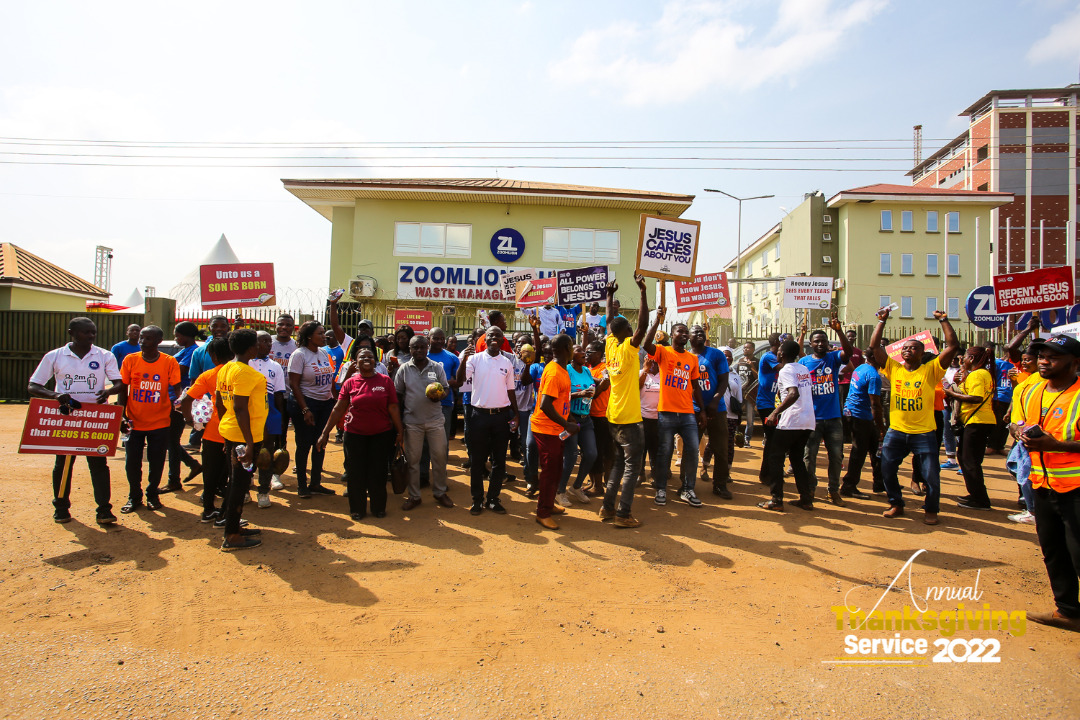 She said the only way to be joyful in life was to surrender one’s life to Christ and as well experience peace.

Just as cleanliness is next to Godliness, she admonished Ghanaians to ensure that their environment was treated with respect. 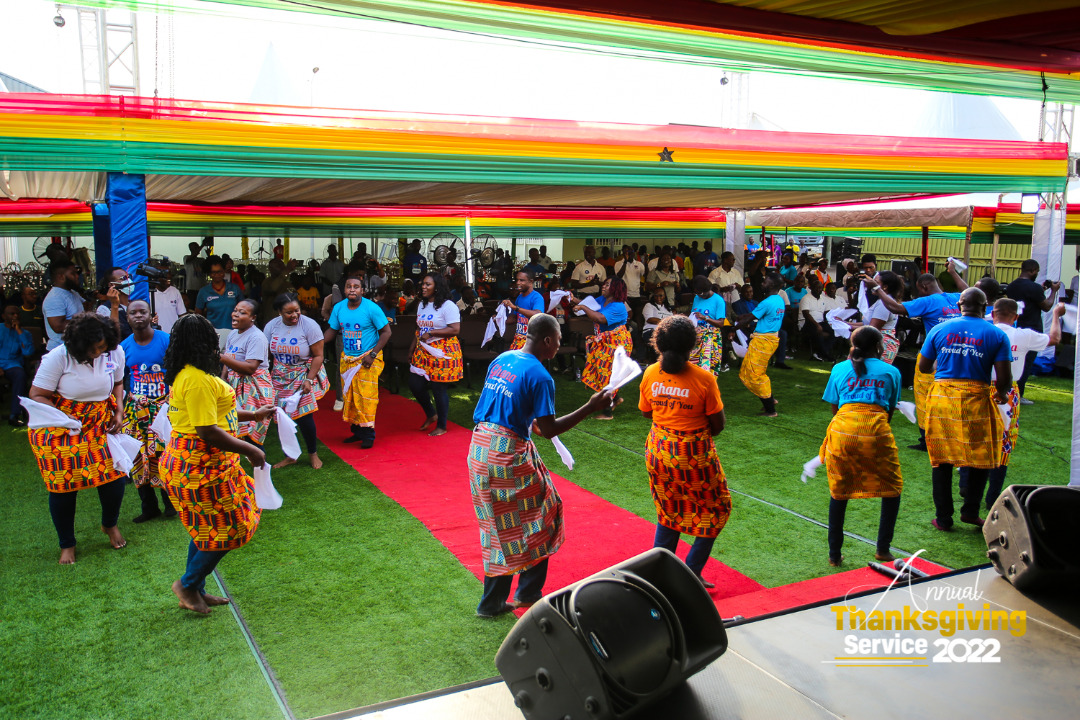 For her part, the Communications and Corporate Affairs Director of ZGL, Mrs. Emma Adwoa Appiaa Osei-Duah, entreated the citizenry to take advantage of the free bins initiative currently ongoing, stressing however, that they may doon be required to pay fot it.

She again urged the public to eschew the practice of dropping trashes around and rather adopt putting them into dustbins. 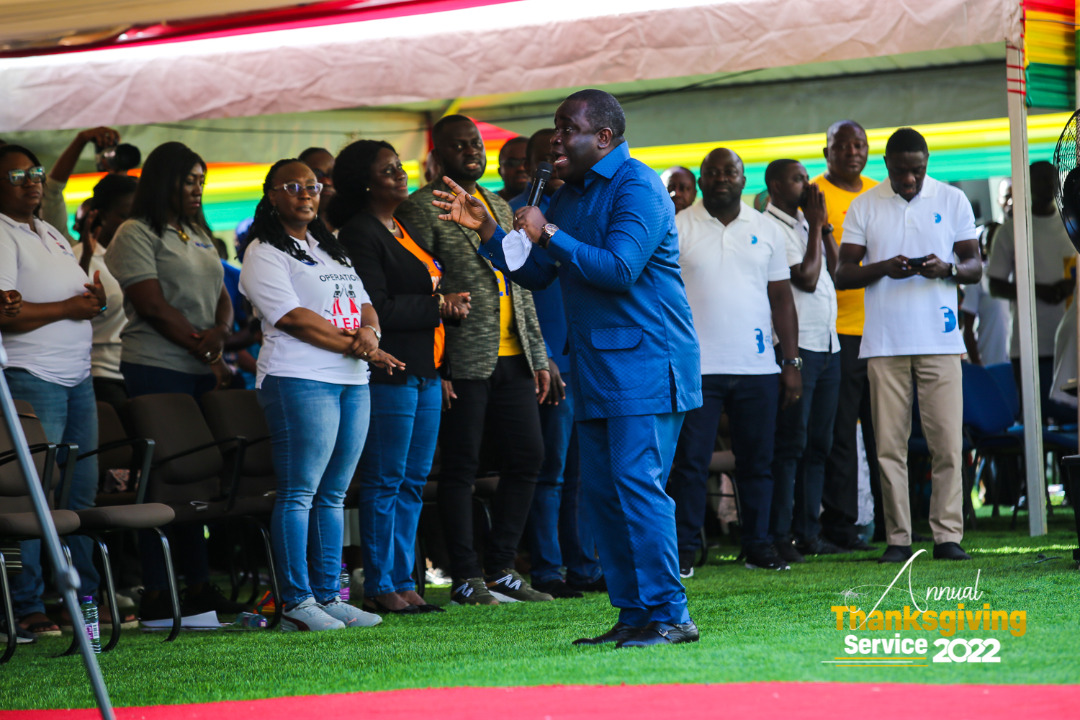 Earlier, the Mission Director of the Church of Pentecost, Apostle Emmanuel Agyeman Bekoe, stated that the Lord deserves to be celebrated for what He has done and who He is.

He explained that celebrating God for His greatness was very vital, especially in the light of His mighty works. 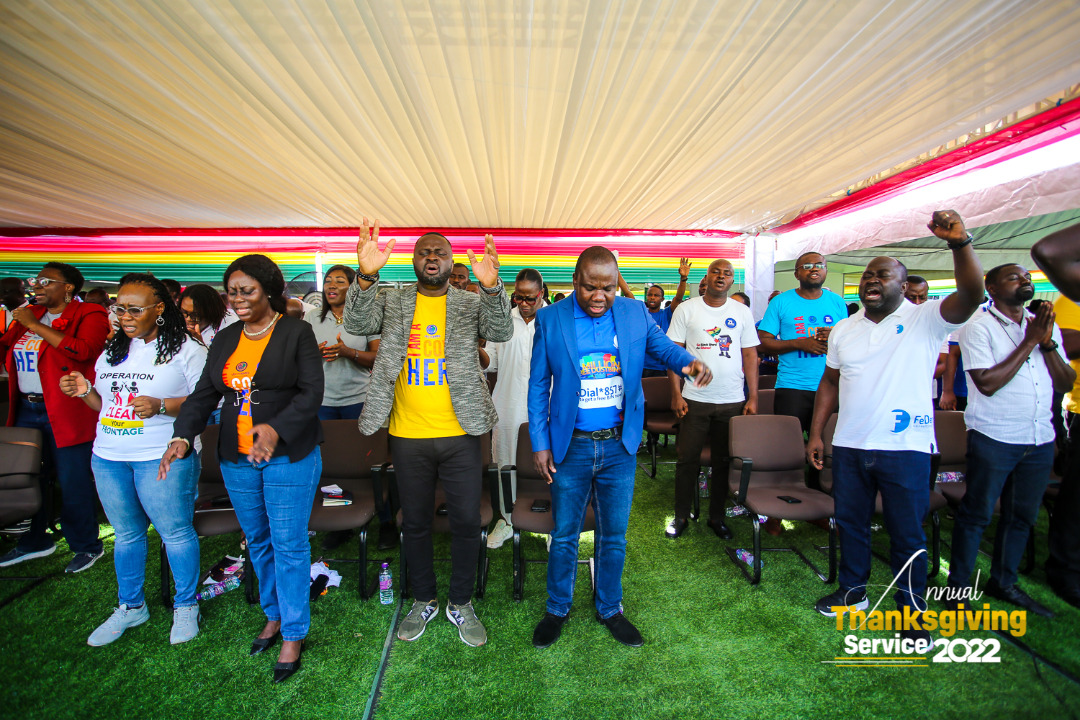 Sharing the word of God with a gathering of staff members, heads of departments of JGC and ZGL Apostle Agyeman Bekoe underscored the importance of celebrating the Lord always.

According to him, God ought to be worshipped for all His deeds

He further explained that offering thanksgiving to God means sounding trumpets and other musical instruments.

While in the Old Testament, thanking the Lord means singing and marching to the glory of the Lord, praying and singing are characteristics of the New Testament era, he averred.

Tracts and placards bearing inscriptions such as “Are you ready for His coming?, Jesus still saves, Jesus is the Way,the Truth and the Light and Jesus, your Shepherd is looking for you amongst others were on display with the aim of reconnecting lost souls back to their Maker.

Gospel Musician, Akesse Brempong, who was the guest artiste, graced the celebration with his melodic ministrations as well as the Present King Choir. 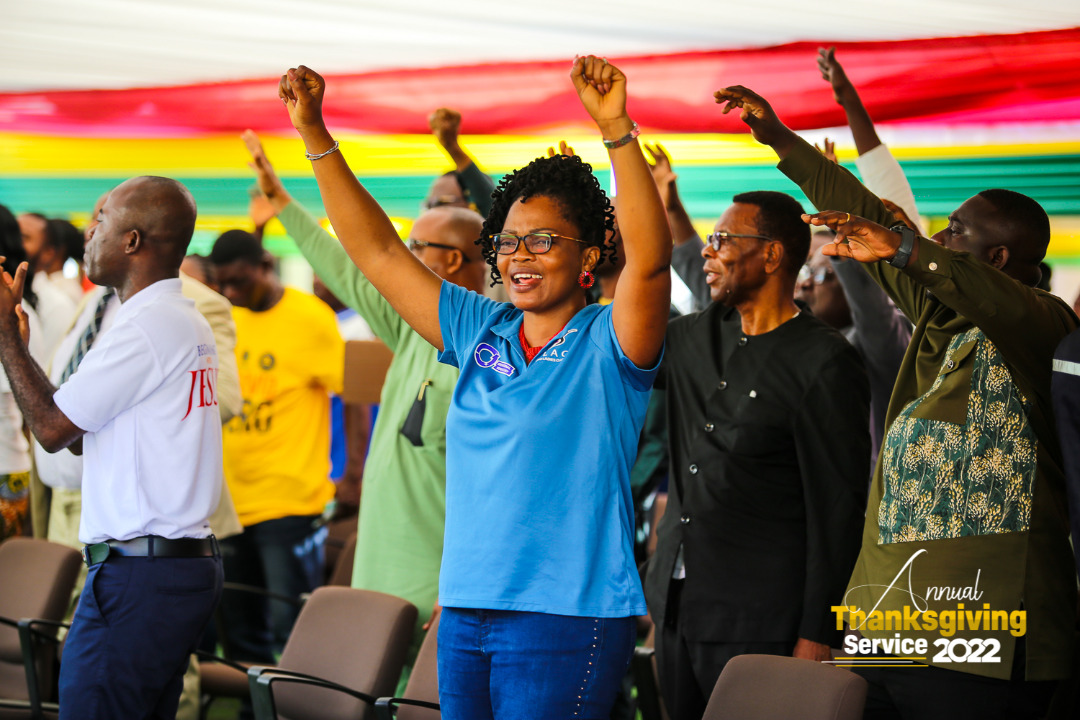 There were amazing displays from various departments within the Jospong Group and Zoomlion.