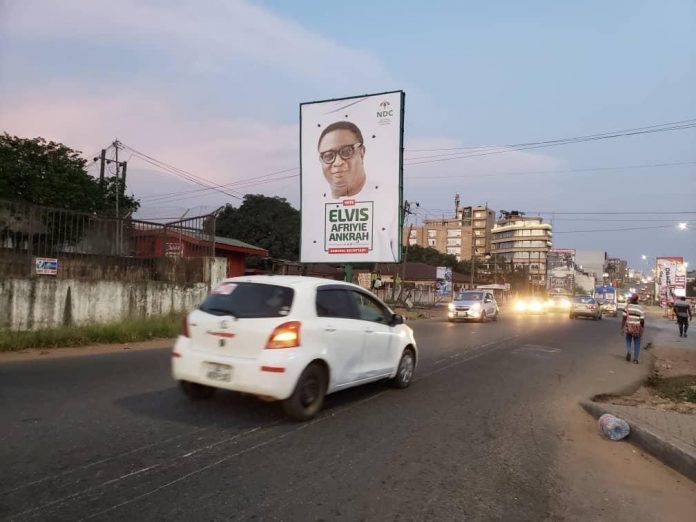 Some former students of Elvis Afriyie-Ankrah have raised funds to mount billboards around the country in support of his campaign to become the next General Secretary of the NDC.

Mr Afriyie-Ankrah lectured the students at the University of Professional Studies, Accra (UPSA), between 2005 and 209.

He said Mr Afriyie-Ankrah helped to shape their lives and taught them lessons they are still applying to their businesses and everyday life.

“Mr Afriyie-Ankrah has influenced our lives immensely and positively and so when we heard that he was vying for the position of General Secretary of the NDC, we felt we needed to support him in any way we could,” Mr Dogbey said.

“We know from that position he can make a very positive impact on the nation and help forge the development we all desire as citizens.

“This is not about politics. It is about a group of former students of our great former lecturer pooling resources to help him achieve his ambitions and his vision for our country.”

Mr Afriyie-Ankrah’s Campaign Manager, Prince Etornam Attipoe, thanked Mr Dogbey and his group for their generosity towards the mounting of the billboards in support of the campaign.

“These are individuals who believe in our candidate and his vision for the NDC and Mother Ghana,” Mr Attipoe said.

“We are running this campaign mostly on donations and we are very grateful to all those who are contributing in diverse ways with ideas, logistics, publicity materials and even in cash.”

Mr Attipoe reiterated Mr Afriyie-Ankrah’s commitment to revamping the NDC to enable the opposition party to wrest power from the NPP in 2024.

He said Mr Afriyie-Ankrah needs the support of all those who hold the interests of the nation and NDC at heart.

“Whiles expressing gratitude for what we have received so far, we can’t help but ask for more,” Mr Attipoe said.

“We are on the home stretch now and we know we are going to win. But we need all the support we can get to push our candidate over the finish line as the NDC’s choice for change.”

The NDC is due to hold its national delegates congress in Accra on December 19, 2022.

Delegates will elect new national executives to fill various positions such as that of National Chairman and General Secretary.

Analysts believe Mr Afriyie-Ankrah will most likely be elected as the NDC’s next General Secretary.