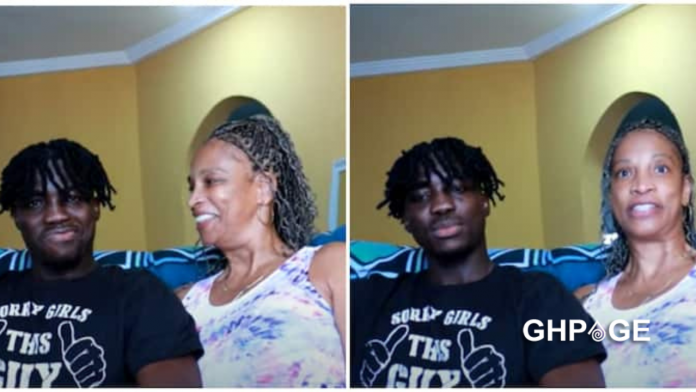 A 26-year-old Ghanaian man named Daniel has gone viral on the internet after he revealed his intentions of marrying his 56-year-old lover named Von.

In a sit-down interview with YouTube vlogger Lily Ogini, Daniel a dog trainer by profession said he did not envisage that his everyday job would one day lead him to his true love.

He revealed that they have been dating for the past 10 months now and seem compatible reason they want to officially exchange vows.

“As a dog trainer, my boss gave me a number of a woman who wanted her dog to be trained. That was how I met Von and that was how things began”.

Quizzed as to whether their families approve of the relationship, both of them answered yes.

Von said “I recently informed my kids that I was in a relationship and would be getting married soon. For them they are happy that their mother has found someone who makes her happy,” she said. Daniel added that “My parents recently came to spend some days with us and they were happy for me”.

Below are how some social media users have reacted t the development;

Samuel Qweku Shakespeare – If a 24 year old girl can marry a 56 year old man then there’s no problem with his as well but you’ll see some fools saying she’s old enough to be his mom. Do you know the number of young girls who’re married to men old enough to be their grandfather Gentleman enjoy life Life is short after all

Mercy Quaynor – Madness, she is old enough to be your mum.

Michael Kojo Faculty – If not because of hardship in Ghana why will an energetic guy choose to marry his mother?

Kumacha Paul – My brother continue, because after 10 years time you can marriage your own wife.

Raz Smith – This is where she has found love and this is where he has also found peace and respect. Age is just a number and I don’t think it matters even

Abraham Duku – Ohia asem y3 mm3b3 but woman if you don’t take he will kill you before your timeb because this is not love but true definition of poverty.