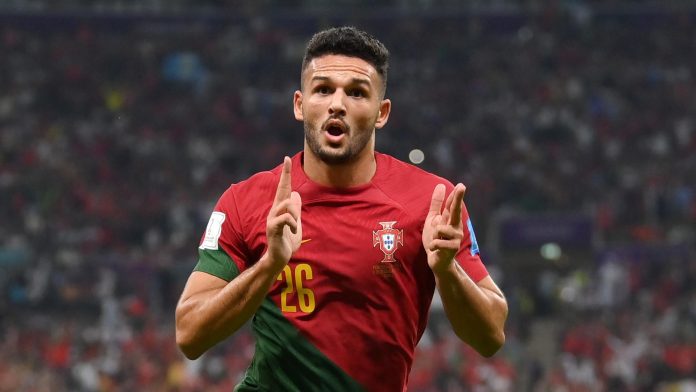 On an incredible night, Goncalo Ramos – 21-years-old, without an international goal, and preferred to Cristiano Ronaldo – scored a sensational hat-trick, as Portugal devastated Switzerland.

The Selecao now meet Morocco in the last eight and look as likely champions as anyone.

The opening was scrappy, but then, on 18 minutes and out of nothing, Ramos lashed in a sensational opener from an acute angle – his first goal for his country.

After that there was only one winner, Portugal imposing their class on Switzerland and creating various chances and situations before and after increasing their lead thanks to Bruno Fernandes’ corner and Pepe’s header.

Portugal maintained momentum after the break, scoring two brilliant goals between the 51st and 55th minutes, Ramos and Raphael Guerreiro scoring them. Switzerland did get one back shortly afterwards, through Manuel Akanji, but then on 67 minutes, Ramos applied a third lovely finish to complete one of the wildest World Cup daydreams.

Rafael Leao then added a superb sixth after coming on as a late substitute, giving one of the best knockout performances of recent times the finale it deserved.