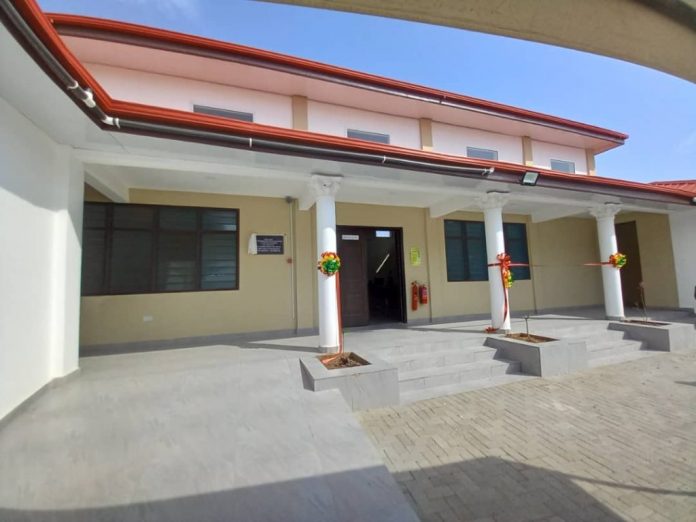 According to the Chief Justice, court houses are national assets, and are reflective of the importance a nation attached to the rule of law and good governance.

“Unfortunately, even though government agreed to construct more than 20 courts within the Greater Accra Region, the local authorities and Niimei have not been able to allocate adequate lands for the execution of the projects.”

Chief Justice Yeboah was speaking at the inauguration of a Circuit Court in Achimota, a suburb of Accra.

The courthouse is fully furnished and fitted with a borehole, solar Power, and a generator. This is to ensure a regular water supply and clean energy. The Circuit Court edifice comes nine months after the Chief Justice commissioned a District Court, which is about 30 meters away.

The newly established court is part of the 100 courthouses promised by the President Nana Akufo Addo, with bungalows for judges and magistrates across the country. The establishment of the court followed various meetings with the Ministry of Local Government, Decentralization and Rural Development and the District Assemblies Common Fund Administrator.

He said in the coming year, UNICEF, one of its development partners would upgrade the Achimota Circuit Court with Information Communication Technology interventions to make same more user friendly to handle cases of domestic violence and abuse of children, women, girls who are most vulnerable in the society.

According to Chief Justice Yeboah one of the visions of the judicial Service was to enhance citizen’s access to quality justice by establishing courts proximity to users.

He noted that cases in the Okaikwei North Municipality and its environ that fell within the threshold of the Circuit Court were sent to the Central Business District, Amasaman or Adenta to the discomfort of Court users.

Chief Justice Yeboah said Judicial Service had worked hard to establish High Courts at Amasaman, Adenta and Sowutuom to stop the mass transfer of cases to the Central Business District of Accra

The Chief Justice urged Ghanaians to have confidence in the court process and make good use of the facility.

“I urge our staff and Assembly to ensure its proper maintenance. For this is the only way we can achieve our mandate and vision for our compatriots and the nation.”

In a speech read on behalf of Mr Henry Quartey, the Greater Accra Regional Minister, was optimistic that the establishment of the court would bring swift dispensation of justice which undoubtedly was key element in the development of a municipality and the nation.

Mr Quartey appealed to the court to collaborate with the Okaikwei North Municipal Assembly to ensure strict enforcement of sanitation bye-laws, especially now that the “Operation Clean Your Frontage” bye-laws have been gazetted.

“I would implore you to try to set aside special days to complement the Assembly’s effort to make the city one of the cleanest.”

Justice Cynthia Pamela A. Addo, the Judicial Secretary, said “If Ghana would survive and thrive as a nation, then the law must be in robust health.”

Nii Amartey III, Abofu Dzase, on behalf of the Chiefs and traditional rulers was elated that Achimota has a Circuit and a District.

He urged members of the various communities to be law abiding citizens and avoid falling foul of the law.