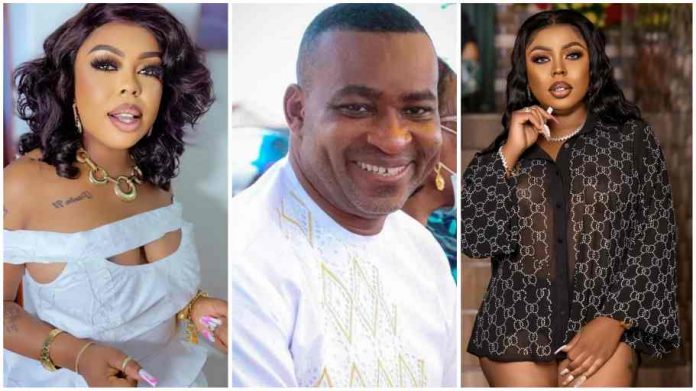 The Ashanti Regional Chairman for the New Patriotic Party (NPP), Mr. Bernard Antwi-Boasiako aka Chairman Wontumi is pledging an amount of GHC5, 000 to any person with knowledge about the hiding place of Afia Schwarzenegger.

Chairman Wontumi is calling on the general public to help the security forces locate Afia Schwarzenegger for an arrest after a Tema high court declared her wanted.

This comes after the court had issued a bench warrant for her to be arrested for contempt of court- meanwhile; she’s nowhere to be found in the country.

Counsel for and on behalf of Chairman Wontumi, Maurice Kwabena Ampaw ESQ., on the 13th of July 2022 stated in an affidavit of support to the High Court that the Saturday, 9th July 2022, edition of the United , was a clear agenda and attempt to give the 4th respondent (Afia Schwar), the needed platform to strengthen her case before the court and to seriously prejudice the matter before this Honourable Court.

Lawyer for Chairman Wontumi, Maurice Ampaw has declared Afia Schwarzenegger “Ghana’s most wanted” following the bench warrant issued by the court for her arrest.

The private legal practitioner in an interview on Movement TV stated that “his team has handed over the warrant to all security patrols teams in the country to ensure Afia Schwarzenegger is arrested immediately she is spotted along the borders of Ghana”.

He also cautioned the public against harboring Afia Schwarzenegger noting that any such individual would face the full rigorous of the law when caught in the act.

READ ALSO :Ayisha Modi and Stonebwoy patch things up with a public display of ‘love (video)