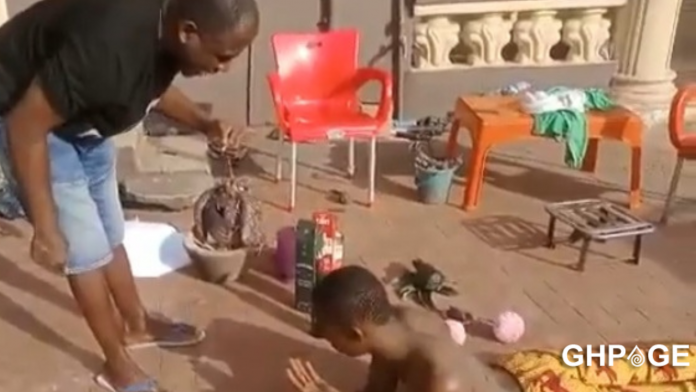 A video of a 15-year-old boy trying to use his mother and siblings for money rituals has gone rife on the internet and received mixed reactions in the process.

Some people are blaming extreme poverty for the young boy’s actions but I bet to differ and strongly believe it’s only extreme greed which will force a boy of his age to think about money rituals.

Poverty has nothing to do with this. Young boys and girls nowadays want to blow money like the stars they see on TV. If it were poverty, he’d be thinking of daily bread.

In this video, the 15-year-old boy stormed the native doctor’s place to assist him in getting quick money.

Looking at his young age, the native doctor deceived him to swear an oath not knowing it was a curse he was placing on himself never to engage in money rituals either now or in the future.

Should we blame native doctors for also playing a role in this whole sudden craze for money looking at how they have taken over Facebook and how they use to give sakawa boys money?

Watch the video below to know more…

This is what you get when society celebrates wealth without questioning the source. Kids have seen men with ill/stolen money being celebrated, and they have seen those who choose to keep a good name die poorly and be laughed at. They are taking cues.