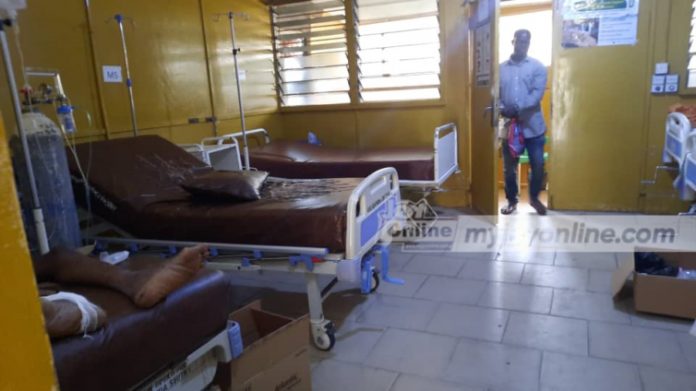 Somewhere in 1998, it was not easy getting an appointment to renew or acquire a visa to the United Kingdom.

As a medical student, queuing all night to get my passport number written down for an interview was the norm.

Those were the days when the security guys at the British High Commission carried themselves as the Don Corleones!

It so happened that after queuing all night, a young boy popped up from nowhere around 5 am claiming to be ahead of most of us in the queue.

Of course, we would not let our rendezvous with the mosquitoes all night be for nothing and warned him not to try crossing the queue. After unsuccessfully attempting to get an unearned space he wandered off.

Few minutes later, a man I would have respected dropped out of a military vehicle with this son of his demanding to be shown the person that had rained insults on him.

His son obviously had cooked up a story that this young guy he attempting to cross ahead in the queue has insulted him and in a-Rambo-style had driven by to show him “who he was”.

What an unforgettable day it proved to be for the man. We all ganged up and pointed out the unreasonableness of his action and the disgrace he has brought not only on his age but his profession as well. He had to leave with his tail firmly tucked in-between his legs.

How on earth could a father who was not around drive all the way because his son tells him he is being insulted.

I know for sure my father would have uttered one of his wise sayings – “ Sɛ biribi ankɔka papa a ɛnyɛ grɛdɛ”- to wit the spiky horns of the palm branch remains noiseless until it has been disturbed. As imperfect as he was, he believed in hearing both sides of the story.

My mum also trained me never to allow anybody to impose their will on me. Your point may not be the popular position but you would be respected for your stance. Those who knew my mum and know me are quick to remark- ah! A chip of the old block.

And so, when I listened to the audio about a father’s unruly behaviour toward a nurse in the Manhyia hospital, that military man came to mind. And of course, it was upsetting hearing those words coming out from him because such scenarios are a far too familiar occurrence in our hospitals.

I have had my fair share of patients using insulting words on me as a way of either registering their frustrations or in their grief. And when it came to light that the call was not to correct a wrong dosage of a drug that would have been lethal if administered as prescribed I knew somebody had gone great lengths to concoct for a reason.

And oh! That Father has done irreparable damage to the daughter. The daughter would need to do a lot to dispel those dark clouds that would hang around her wherever she works. How is a doctor supposed to work without nurses?

Working with nurses will always arouse emotions and bring back sentiments. Of course, the converse holds where nurses will walk on tenterhooks around her fearing the worst. Would her father be unleashed on me if I step on her toes? How would she take it if I correct her genuine mistake?

These are not desirable accolades anybody would want to be known for much less for a doctor starting her medical career. No matter the provocation, the dad’s action cannot ever be justified. As a director in a public institution, he knew there were channels for seeking redress and he deliberately ignored them.

If the nurse believed in using the physical appearance to insult, the father showed that he had a degree in applying it to the nurse. In his intense anger he went overboard, denigrating the whole nursing profession, the school the nurse attended, her hometown and family and needlessly launched an attack on people who pursued General Arts subject.

That infamous “do you know who I am” and went ahead to mention who he was, is the reason why he is on suspension. I suspect the blame will squarely fall on the devil even though I have no doubt that he spoke out of the “abundance of his heart.”

I have been a doctor for 20 years and man! I am not as proud of my achievements and my job as this father makes it sound. Of course, after years of treating humans and losing others, the experience is more humbling.

So, what really pushed a father into this rage? As gathered from an authentic source, House officer was in church with dad after her shift with her phone on silent mode.

She realizes after church that she has missed 7 calls from a particular number, she calls back and it’s the nurse blasting away – questioning why she is not picking her phone and went on a tirade and hung up without telling her why the numerous calls.

Besides not being necessary, the nurse had no business insulting the house officer since she could have documented in the nursing note and escalate. House officer calls back and nurse continues after initially refusing to speak to her and mentions that she had called the other male doctor.

House officer calls her male colleague because as at then, she still had no idea what she had done wrong. Then she was told by the colleague that it was because the hospital didn’t have the Normal Saline she prescribed in stock and so needed to change it to Ringers Lactate which was available.

Really? So there was no ward stock of fluids she could have borrowed from? Was there no other doctor in the whole hospital who could have prescribed?  The call was not about wrong medication or dangerous dosage? So why that artfully contrived lie about the IV diazepam and dosage and a child when there was no child involved at all?

Father decides to drive daughter to the hospital to effect the change and stays in the car. Daughter goes to the hospital, comes back crying because of the overt bully by the nurse.

Father loses it, goes to confront nurse who was very rude to dad and the rest is as we know. I am not in any way justifying the action of the Dad at all. I still think he could have been a “father” to all by calmly settling issues aimed at maintaining work place harmony.

That said, the elephant in the room that needs addressing is bullying at the workplace. Nurses who have been around for some time take it all out on their colleagues especially their juniors.

House officers are easy targets by nurses because of their transitory status and being at the bottom end of the doctor’s scale. Bullying is by no means a preserve of nurses, senior doctors particularly those in management positions tend to bully their colleagues.

That said, I have also had the pleasure of working with very pleasant nurses and continue to work with fantastic nurses both public and private facilities alike.

I refused to be bullied as a house officer. I stood my grounds and made some friends and I believe a lot more enemies from nurse bullies.

I remember during my orthopaedic rotation where I had communicated my inability to procure blood from the blood bank to my senior resident in theatre, this tyrant of a matron was upset and rained insults on me calling me lazy for my inability to secure blood for the surgery.

Of course, I stood up to her and the well-known “my son is older than you” was floated around to which I responded that “yes, your son maybe older than me but I am not your son!” of course I was reported to HOD of Orthopaedic but my Senior resident, now a fantastic Orthopaedic Consultant came to my defense and put things right. There were no more attempts at bullying, at least not in my direction on that ward.

And so quite recently, when as a specialist gathering data for my fellowship at the Maternity Block, one matron told me that if I did not pay her, she will stop the mothers from bringing their babies for me to examine them for evidence of heart disease.

Her reason? “You people will soon become professors and chop big monies.” With an impassive face I told her to do her worst because not a penny would be paid. That ended it. I completed my data gathering with no interruptions.

Bullying in the healthcare space is real and must not be swept under the carpet. People must learn to respect the various roles played by each category for the common good of the patient.

So did this father abuse the nurse? Obviously yes. A problem between your daughter and her colleague at work should be settled at work and not warrant a father to the rescue. Parents must train the children to be able to stand up for themselves.

The world is becoming more dangerous by the minute.   What if the father brought his whole community and associates to the hospital – how would you have called him? A bigger bully or abuser?

How then should we describe an association that brings its whole might through a series of graded action to culminate in a nationwide strike because one person was insulted? Could there be a better description of a gargantuan bully?

I belong to the Ghana Medical Association – but I would not be that proud a member if GMA declared a road map culminating in a nationwide strike action because a doctor has had a fallout with somebody.

That would be a classic case of using a sledgehammer to kill an ant- and it actually symbolizes weakness instead of strength.