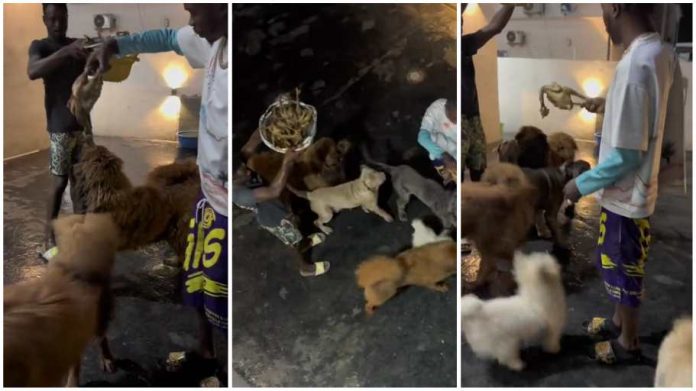 Popular Nigerian singer, Naira Marley has caused a stir on social media after he shared a video of himself feeding his large number of dogs.

In the clip shared on his Instagram page, Naira Marley was seen at his mansion and captured the hearts of many over the king size food he feeds his dogs with minimum of seven in numbers.

The CEO of Marlian records put his beautiful dogs in an utmost excitement mood as he single handedly feeds each and everyone of the dogs with a whole boiled chicken and accompanied the video with hit latest track, Vawulence.

Recall on Friday November 25th, 2022, Intel Region reported that Naira Marley releases a diss track dubbed Vawulence and claps back at his former signee, Mohbad by attacking his maternal figure.

This comes after Mohbad, the “Imole” hitmaker earlier released a song titled “Tiff” and throws shade at Naira Marley after he had earlier accused Naira Marley and his gang of being after his life after being being hospitalized due to injuries bestowed on him at the marlian house.

Sharing a video of him feeding his dogs with king size boiled chicken, he wrote; ” #vawulence.”