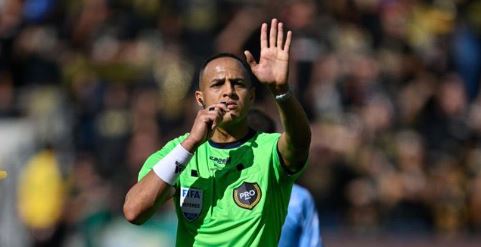 On 24th of November, 2022, Ghana Black Stars clashed in a football match with the Portugals in the ongoing 2022 FIFA World cup where a controversial penalty was awarded to Portugal’s captain Ronaldo.

A lot of Ghanaians lambasted the referee over his refusal to check the VAR before awarding the penalty. One of the people who dragged the referee was sports journalist Saddick Adams, who described Ismail Elfath as an apology of a referee and called out FIFA to penalize the referee.

In a report sighted on Ghanafeed.com, sports journalist Saddick Adams, Ghanaian Dr. Joe K, formerly of Prempeh College caught up with the embattled referee in Qatar.

In reaction to the public outburst, Ismail Elfath insisted that he awarded Christiano Ronaldo the penalty based on what he saw at the moment on the pitch. He emphasized that it was a penalty and he would have been told otherwise by VAR if it was not the case.

He however expressed shock over the backlash he received from social media users online; adding that he has also taken note of the contrary opinions expressed by renowned referees and pundits.

READ ALSO: I’ve been there before – A Plus reacts to Hopeson Adorye’s dismissal

Ismail Elfath insisted that he loves Ghana and doesn’t have anything against Ghana as reported because he used to play football with Ghanaians.