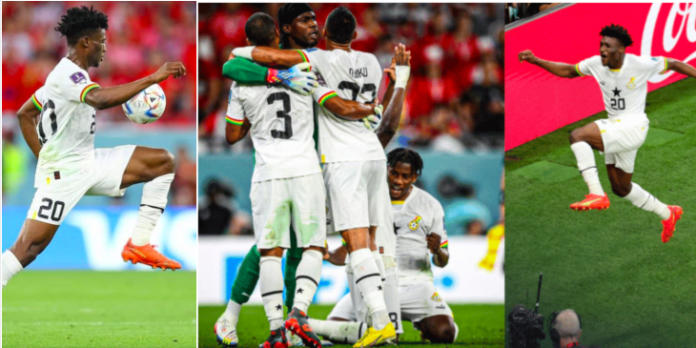 The news of Ghana’s victory against South Korea has been widely reported since yesterday, and the result seems to have been well received by the general public.

After a thrilling 3-2 win against South Korea on Monday at a sold-out Education City Stadium, the Black Stars kept their World Cup quarterfinal aspirations alive.

Ghana seized the lead against the run of play in the 24th minute when Mohammed Salisu scored from close range after South Korea failed to clear a free kick, and they increased their lead to 2-0 before halftime thanks to a glancing header by Mohammed Kudus.

READ ALSO: Ati Zigi is better than De Gea – Fans pour out their admiration for Ghana’s keeper after good game against South Korea

In the 68th minute, Kudus scored the game-winning goal by finishing coolly past a diving Kim Seung-Gyu from within the penalty area.

Portugal and Ghana both have three points in Group B, with Uruguay and South Korea following with two points each. Ghana’s pre-competition ranking was 61st. Portugal and Uruguay will play each other later on Monday.

The short video showing the events just before the second goal has sent football fans into a frenzy.

Ghana’s second goal against South Korea was built up by almost 30 straight passes.