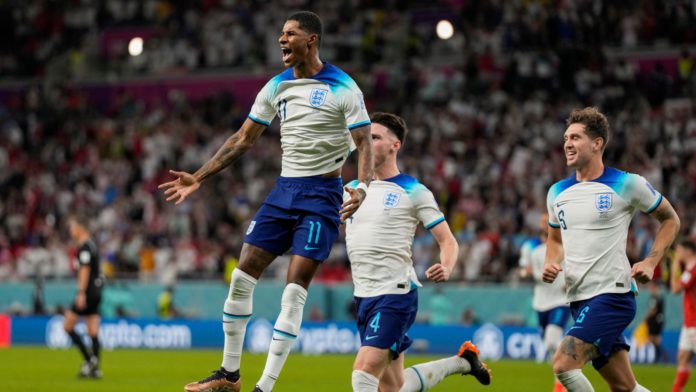 Marcus Rashford inspired England to the victory required to top Group B and ensure it was despair for Wales as they went out of the tournament after a bitterly disappointing World Cup campaign.

Wales needed to either beat England and hope Iran and USA ended in a draw or pursue the more unlikely outcome of running up a four-goal victory margin at Ahmad bin Ali Stadium.

England, who now face Senegal in the last 16 on Sunday (19:00 GMT), ensured neither scenario was ever a serious consideration as they dominated throughout and took full control after an uneventful first 45 minutes.

Wales manager Rob Page took the bold decision to substitute Gareth Bale at half-time, although the great talisman had only had seven touches in an anonymous display, but any hope the shock tactic would work was wiped out as England scored twice within six minutes of the restart.

Marcus Rashford fired a free-kick past Danny Ward following Ethan Ampadu’s foul on Phil Foden after 50 minutes, with the Manchester City midfielder then marking his return to England’s team moments later by turning in Harry Kane’s cross at the far post.

Wales were demoralised and outclassed as they knew they were on the way home from Qatar and Rashford added his second in the 68th minute, with a large slice of help from Wales keeper Ward who allowed a fierce shot to slip through his legs.