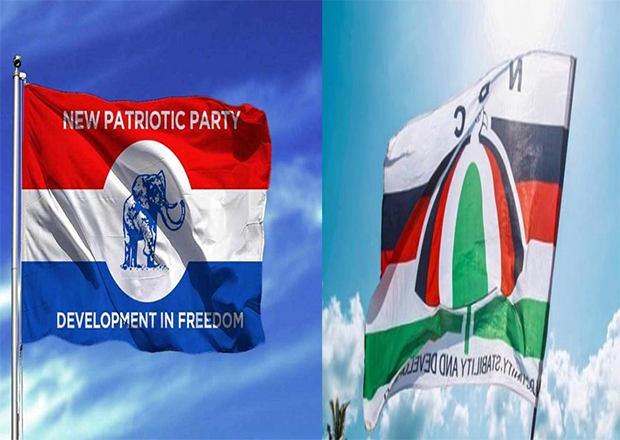 There is political wrangling in the Suhum constituency of the Eastern Region, between the ruling New Patriotic Party (NPP) and the opposition National Democratic Congress(NDC) over the removal of NDC flags and banners.

Former President John Mahama as gathered was initially slated to attend a traditional event in Suhum over the weekend but his invitation was later canceled.

Owing to this, the NDC’s constituency executive hoisted the party’s flags and John Mahama’s banners in Suhum township to welcome the former President.

But the flags and banners were removed allegedly on the instruction of the MCE, Margret Darkwa.

A statement by the National Democratic Congress in Suhum on Monday stated that the party has “learnt with great disappointment, to the destroying of NDC’s flags hoisted on the principal streets of Suhum township by NPP thugs led by the Suhum MCE.

“Before our people could say anything, these NPP hooligans with the MCE visibly involved, started destroying our party flags”.

The statement issued by Dove Maxwell, constituency communications officer further stated that ”NPP is very much aware of the humiliating defeats that await them as we inch closer to December 7, 2024, General elections hence have adopted this childish and disgraceful tactic just to intimidate our people and scare them from coming out in their numbers to vote for President John Dramani Mahama and our Parliamentary Candidates on election day”.

“However, we will be forced to retaliate in double measure if they don’t put a stop to these acts”.

The statement further said “We have constantly challenged them on issues and called for a comparison of achievements of the two parties. Suhum deserves mature politicking and campaigning of and on issues. Suhum does not deserve this needless instigation and antagonistic attitude”.

“We call on the security agencies to urgently investigate these series of attacks and appropriately call to order the perpetrators and assigns in other to boost the confidence of Constituents in the constituency and the region at large.”

“Suhum Constituency is a very peaceful place, hence this shameful act being executed by the NPP and the MCE to destabilize the seeming peace enjoyed should be of great concern to all and sundry,” the statement said.

However, the Suhum NPP Communications Officer, Samuel Baah in reaction warned the NDC to stop the outmoded propaganda of shouting wolf where there is none.

According to the NPP, the release by the NDC being circulated on some social media platforms insinuates that some thugs they perceive to be NPP members launched an attack on some NDC members to destroy NDC flags in the Constituency before the grand durbar of the 2022 Suhum Odwira Festival is frivolous and mere propaganda targeted at gaining needless public attention and must be treated with the utmost contempt.

The NPP in the statement said the NDC in the Suhum Constituency had the shock when constituents demonstrated a resounding welcome and love for the NPP and the arrival of Vice President Dr. Bawumia to the 2022 Suhum Odwira durbar.

“Indeed the NDC’s attempt to boo the Vice President was not supported and outrightly rejected by the good people of the Constituency hence an attempt to squeeze frivolous propaganda to catch up with time. This tactics by the NDC is outmoded and cannot stand the test of modern politics”.

“The NPP in the Constituency has endeared itself to the constituents as a peace-loving and development-oriented party and so no amount of propaganda can dent the good image of the party and its leadership in any circumstance. The party is more than resolved and optimistic of constituents’ support as we continue the unprecedented developmental projects in the Constituency and the nation as a whole, ” the statement underscored.