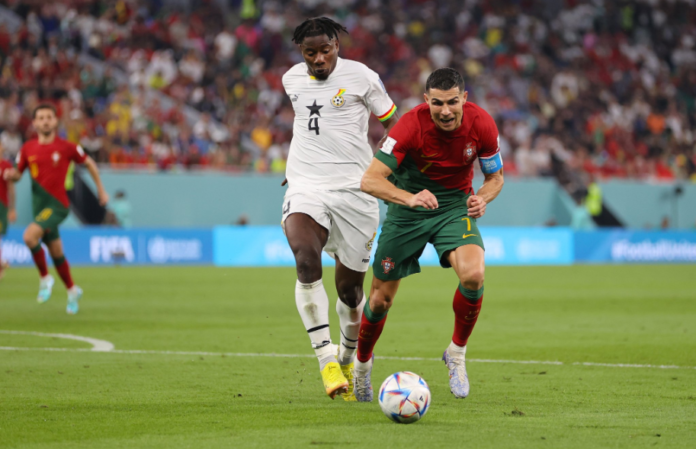 Cristiano Ronaldo has been called a “total genius” by FIFA member Sunday Oliseh for winning Portugal a penalty in their dramatic 3-2 win over Ghana.

Ronaldo appeared to initiate contact when he went down after a challenge from Mohammed Salisu when the pair were running for the ball inside the penalty area.

Referee Ismail Elfath pointed to the spot and was not instructed to view the pitchside monitor.

Ronaldo converted the penalty to become the first man to score at five World Cups, as Portugal held on for victory after some late drama.

“Maybe the strikers are getting smarter?” Oliseh, who is part of the FIFA Technical Study group, said in a briefing in Doha. “The Ronaldo penalty, people can say what they want about him, but the smartness to wait for that second, to touch the ball, continue his leg and then get the contact. That is total genius.

“Let’s give strikers the compliment for getting smarter. VAR is also a major reason why this [more penalties being awarded] is happening. Referees can look at it three or four times.”

Ghana manager Otto Addo was furious with the decision and labelled it a “gift” from the officials.

Asked if the penalty was given because it was against Ronaldo, he said: “I think you have to ask the referee. I have no proof of that. We were playing the ball and then there was contact.

“I don’t know whether they were not paying, or whether the VAR was not paying attention. If you look at the replay, we played the ball, it was actually a foul against us.

“I tried and asked some people from FIFA if I could speak to the referee in a calm and quiet way. They said he was in a meeting and not possible.

“I think they have match analysis and an instructor. Surely you could have some minutes for the coach.”

Portugal went top of Group H with the victory, and face Uruguay next on Monday night.

Ghana are up against South Korea, who drew 0-0 with the Uruguayans in their opening match.