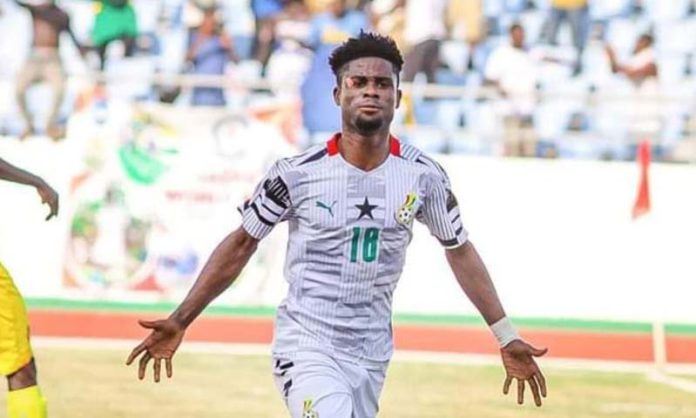 General Manager of Accra Hearts of Oak FC,  Bernard Nana Adu Gyebi is expressing hope that the club’s striker, Afriyie Barnieh will get to feature for Ghana, at least in one of the matches in the ongoing 2022 FIFA World Cup in Qatar.

Afriyie Barnieh made Otto Addo’s final 26 man squad for the World Cup tournament but there are concerns, he may not be given the chance to play due to competition from other players at his favored position.

However, the 21-year-old Hearts of Oak forward was lauded by football enthusiasts in Ghana when he displayed a stunning performance against Switzerland in Ghana’s pre World Cup friendly, few days before the tournament commenced.

His performance in the Switzerland game many believe was a statement that, the youngster will be up to the task when given the opportunity to play at the World Cup.

Acting General Manager of Hearts of Oak, Benard Nana Adu Gyebi is in Qatar to support the Black Stars.

Speaking in an interview with Nhyira FM, he said, Barnieh has proven to be a good player.

He adds, he’s confident, the striker will see some minutes on the field of play before the tournament ends.

“I will not be surprised if he [Barnieh] is given the opportunity.

“Hopefully, i am sure someone he has used in a friendly match, definitely he will use him in one of the games.

“And it’s our hope and believe that when he’s given the opportunity, his star will shine.” He said.

The Black Stars of Ghana lost their first match at the 2022 FIFA World Cup in Qatar to Portugal and their next game is against South Korea on Monday, November 28, 2022.