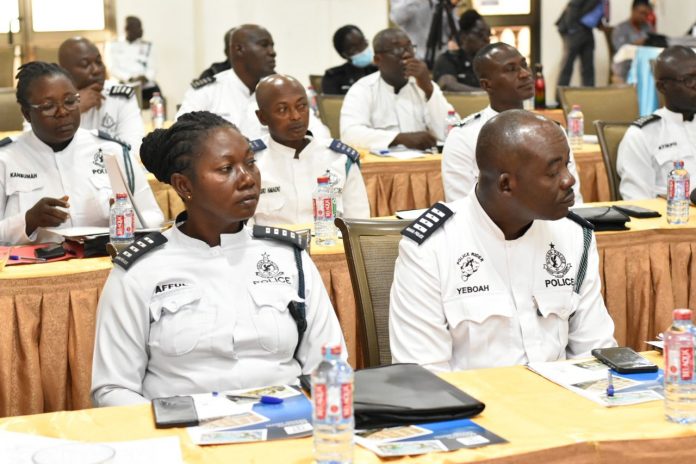 According to the Bureau, it is imperative for foreign motorists to have the ECOWAS Brown Card as that enables them to access claims against third party liabilities incurred while in the country and the other 14 member states of ECOWAS excluding Cape Verde which is an Island Country.

This admonition was to ensure that foreign motorists have in their possession and on display, the ECOWAS Brown Card was made by the Ghana National Bureau during a the launch of a 3-day training workshop for some 40 personnel drawn from the Accra and Tema Regions of the MTTD. This forms part of a nationwide training workshop for the Officers on Tuesday, November 22, 2022.

Speaking to the media, the General Secretary of the Ghana National Bureau of the Scheme, Mr Richard Sarbah Eshun noted that the training was to equip the personnel across the country to be abreast with new developments and the ability to identify and validate the authenticity of ECOWAS Brown Card certificates used by foreign motorists across the sub-region.

Some of the features/particulars that personnel of the MTTD should be on the look-out for when determining the authenticity of the ECOWAS Brown Card Insurance certificates include; name of issuing national bureau; particulars of policyholder; particulars of insurer; policy number; individual serial number; and period of validity of Brown Card

On his part, the Director of Training and Research at the Police MTTD, Chief Superintendent Alexander Obeng noted that the Department was committed to ensuring the success of the scheme on our roads and to ensure that safety on our roads are prioritized especially in the event of accidents involving foreign vehicles from the sub-Region.

He commended the ECOWAS Brown Card Office for their continuous training support and assured the Ghana National Bureau of the support of the Police MTTD.

It is important to state that Ghana became the first Anglophone country to join the Franco-phone countries to issue Brown Card automatically to all motor insurance policyholders. Indeed, the Francophone countries in the sub-region blazed the trail in this regard.

The scheme is expected to facilitate prompt and fair compensation payment to victims of motor accidents caused by a non-citizen motorist from a member country.

It is a territorial extension of the motor third party liability insurance, which enables motorists to travel freely within the ECOWAS Brown Card region.

A System for settlement of claims

It is a common system for the settlement of motor insurance claims arising from international motor vehicular accidents. The initiative is expected to enhance trade harmony among member countries; particularly with regard to the laws and regulations on motor accident liability.