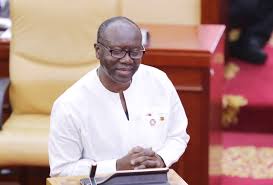 The government is expected to reduce the e-levy rate from 1.5% to 1%.

In the 2023 budget statement, the Finance Minister said the review of the act is to “aggressively mobilize domestic revenue” and is a part of the seven-point agenda aimed at restoring macroeconomic stability and accelerating our economic transformation.

He believes this will lessen the economic hardships Ghanaians are facing in the country.

Ken Ofori-Atta admitted that the e-levy did not yield the results they expected.

The e-levy rate pegged at 1.75% initially was reduced to 1.5% after Ghanaians protested against it.

He also disclosed that the government got several proposals to review the e-levy, and is working closely with all stakeholders to evaluate the impact of the e-levy. He said these could include the revision of the various exclusions.

“As a first step, however, the headline rate will be reduced to one per cent of the transaction value alongside the removal of the daily threshold,” the Finance Minister stated.

The government reduced expectations for revenue collection from the e-levy after an initial projection of GHS 7 billion and reduced more to GHS 611 million in July 2022.

The general public and the Minority opposed the implementation of the e-levy when the Finance Minister announced it. It took Parliament so long to pass the e-levy bill since the debate over its passage went on for four months but got implemented in May 2022.

Meanwhile, he mentioned that the government wishes to increase VAT by 2.5% in 2023. This increased rate forms part of the seven-point agenda to revive Ghana’s economy.

The VAT rate is to increase from 12.5% to 15%, and it is to directly support road construction projects and the digitization agenda.

Ken Ofori-Atta announced this while presenting the 2023 budget statement on Thursday, November 24, 2022.