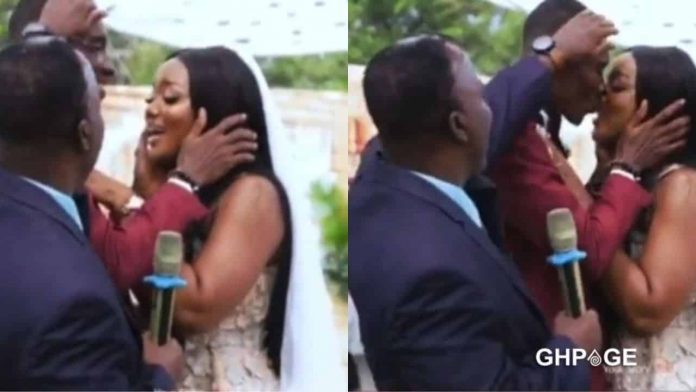 There was drama in a church in Nigeria after the officiating clergy stopped a couple from getting hitched after they confessed to having engaged in a foreplay during while dating.

A Twitter user identified as Christina shared the story of how the nuptials in a church close to house was cancelled in the presence of the family of both parties and the invited guests.

According to her, the pastor called the couple into his office to have a quick conversation with them about their intimate life on the direction of the Holy Spirit before he proceeds to declare them husband and wife.

It was at this point that the bride-to-be reportedly confessed to her pastor that she and her fiancé had in a way been intimiate during their coutrship but never had penetrative sex.

The pastor immediately declared the wedding could not continue because the couple had defiled their bed, albeit they never had coitus.

Read the tweeps full narrative below.

‘There was this wedding that was supposed to hold on a Saturday in a church around my neighborhood. On the wedding day while the wedding ceremony was already going on, the pastor came out and called the groom and the bride into his office and he said “I know I’ve asked you this before but the holy spirit keeps disturbing me now to ask you again if you both have not had premarital sx” and they both said NO, they never had sx.

‘And the pastor asked again “Sister, has this brother ever touched you?” and she said “Yes, he only kiss me, press my breast and fingers me but we never had s*x” And the pastor came out of his office with the bride and the groom and he said ” I know all of you here are here to witness this holy matrimony but we’re sorry we can’t join them as husband and wife because their bed has been defiled. And that was the end.”

In a related disappointing wedding news, a man has called off his wedding after finding a past post of his wife-to-be on Facebook saying she can cheat on her husband if offered and given 1 million Naira which is equivalent to 32,000ghc.

Apparently, the bride-to-be didn’t share a whole post saying she would leave or cheat on her husband for 1 million Naira but commented when a Facebook user asked.

This story was shared by a Twitter user. READ MORE