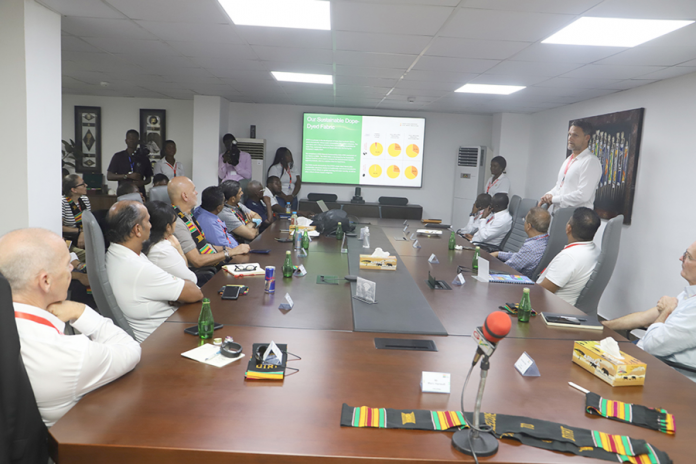 Marc Hansult (right), CO-Chief Executive Officer of the DTRT Apparel Limited explaining a point to some delegation from notable clothen Brands across the world, during a visit to the company in Accra. Picture: GABRIEL AHIABOR

The Co-founder and Chief Executive Officer of Dignity DTRT Apparel Ltd, Marc Hansult, has said that the garments industry in the country has tremendoous growth opportunities.

He said stakeholders in the industry must therefore put in place measures to ensure these growth opportunities were harnessed.

The CEO said this when the Tony Blair Institute toured the DTRT factory in Ghana.

He said the DTRT had a very ambitious plans to grow, noting that it already employs over 5,000 people.

“Today, we believe that for our business, there is an opportunity to grow this and double the size of the operation and grow to 10,000 people over the next three to four years,” he stated.

As part of the tour, there was also an apparel roadshow to showcase the works of the company.

Mr Hansult said he was optimistic that the brands at the roadshow would invest in the company.

He also pointed out that the company was also in discussion with the International Finance Corporation (IFC) for fudning support to build a new factory that would employ about 3000 people.

He said the company would also establish an integrated dope-dye textile mill in the country that would produce custom sustainable synthetic materials.

The Ex Chief Supply Chain Officer at PVH, William McRaith, for his part, said there was a lot of commitment towards circularity in the apparel industry.

“There is an opportunity to build an industry that is unique and one that no one else has anywhere in the world. One, where apparel is not only made but it is made from recycled fibers of older powders”.

He noted that, investors were looking for something that solves existing problems as well as future challenges.

“All the supply chains that are out here today were built for the last 30 years. We have the opportunity to build for the next 30 years. And so we’ve got to build it looking into the future,” he added.

Mr McRaith explained that, the apparel industry was the second dirtiest industry in the world.

That, he said could be changed if they do things right, they could transform the industry to make it one of the cleanest industries in the world today.

The Tony Blair Institute for Global Change, as part of its initiati non-profit organisation, organised a tour of the apparel industry in three West African countries.

The tour was to get a better understanding of the industry in Africa, explore partnership opportunities with African brands and expand its customer base.

The institute toured Cote d’Ivoire, Togo and Ghana being the last with one of the largest apparel business in the West Africa; the Dignity Do The Right Thing (DTRT) Apparel Limited.

The Dignity DTRT Apparel Limited, is an expert in fabric production and garment manufacturing.

It held its apparel roadshow in Accra yesterday (Nov 17) to showcase it works and eventually go into business with global brands.