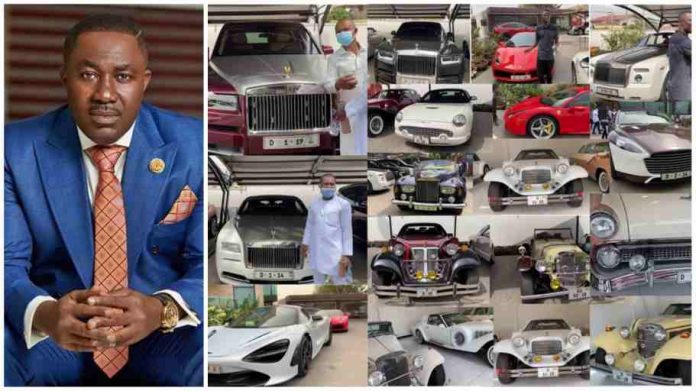 All things have shown that Dr Osei Kwame Despite is an automobile enthusiast who splurges chicken change from his pocket on expensive whips.

Aside from the chain of businesses, mansions, and the affluent lifestyle, popular Ghanaian business mogul, Dr. Osei Kwame Despite, does not hesitate to flaunt his powerful fleet of machines at major events he has graced lately.

With these cars, some of which are limited editions or models that never go into mass production, Kwame Despite’s garage might more aptly be touted as a car dealership.

This can be attested to as has been seen in several viral videos where a collection of such cars have been captured at his residence.

That’s not all. The public has also had the opportunity to catch a glimpse of some of these vehicles in the several instances he made appearances.

Let’s take a look at some events where Osei Kwame Despite flaunted his luxurious vehicles.

Kwame Despite, sometime in 2020, pulled up at the wedding of his son, Kennedy Osei, and Tracy, in a long convoy filled with exotic cars, as captured in a couple of videos that went viral on social media.

The fleet of cars ranging from a Tesla, and Rolls Royce, to a Maybach McLaren, among others, were spotted at the ceremony which took place at TRASSACO in Accra.

This particular occasion was the talk of the town as Dr. Osei Kwame Despite was said to have emptied his garage of all the luxurious cars to make his son’s wedding as lavish as possible.

Apart from acquiring the 2022 Bugatti Chiron Super Sport worth over $3M as his 60th birthday present, Osei Kwame Despite also stormed the event with his entourage in flashy vehicles.

In photos and videos which flooded the internet at that time, the Bugatti was presented to him halfway through his 60th birthday dinner and the event grounds was also filled with other luxurious cars.

Despite’s garage on display during his 59th birthday

In one of the videos spotted on social media during his 59th birthday, Osei Kwame Despite’s plush garage was on display.

Some patrons at the event had the opportunity to view the cars which filled the compound and his garage.

In some of the videos that went viral, Fadda Dickson, Mr. Osei Kwame Despite’s ‘right hand man’, was captured taking some individuals on a tour inside the garage.

Dr. Osei Kwame Despite pulled up in grand style at his son’s graduation with his latest Bugatti Chiron Super Sport among others.

Seen in the company of his business partner, Dr. Ernest Ofori Sarpong, Fadda Dickson, and some close family members, Kwame Despite stole the show as other parents stood and watched his cars lined up at the venue.

Videos from the event which was held on November 11, 2022, generated a lot of buzz on social media.