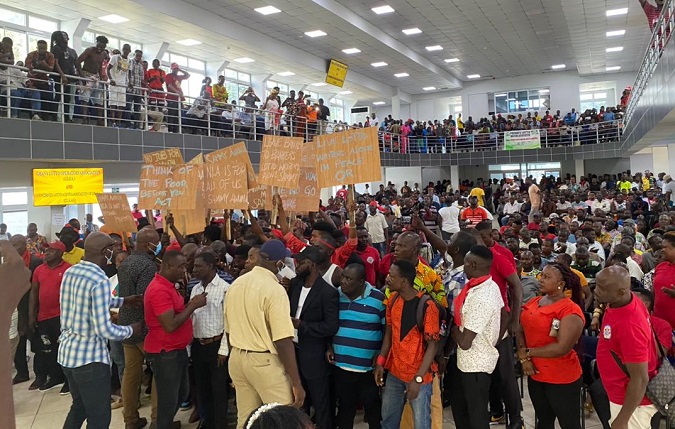 Member of lotto associations in the country have kicked against the directives from the National Lottery Authority (NLA) and its governing board regarding the 20 per cent commission offered to lotto writers in the country.

The members of the Ghana Lotto Operators Association (GLOA), Private Lotto Operators (PLO) Concerned Lotto Agents Association of Ghana (CLAAG), and the Lotto Writers have asked the NLA to increase the commission to 40 percent considering the recent hike in fuel prices, the depreciation of the cedi, and the high inflation rate amongst others.

The agitated members of the associations, clad in red, with placards in protest of the reduction of their commission indicated that commissions paid to lotto writers have been reduced from 30 per cent to 20 per cent, a whopping 10 per cent reduction in their income levels will collapse the business.

Some placards carried by members read ‘NLA Is For All’ Think About The Poor Before You Act’ Sammy Awuku Will Go, Another Will Come’ and ‘Sammy Awuku Why’.

Addressing members of the association at a stakeholder meeting Executive Secretary, Kweku Duah-Tawiah said the directive from the authority which was implemented has resulted in several incidences of near alterations between lotto writers and their respective agents.

This coupled with numerous outpouring of angered writers expressing themselves through voice calls, WhatsApp, and SMS messages to the executive officers demanding a sustained nationwide demonstration against the reduction until such times that it will be reserved.

“The association convened this important meeting to calm the nerves of the Lotto writers as CLAAG has written to the National Lottery Authority (NLA) to register its grievance to the reduction of commissions,” he said.

“We hope to seek an amicable solution to the problem at hand, of course with the active participation of GLOA” he added.

Some of the aggrieved members who spoke to the paper the authority want to siphon the little income generated by the poor lotto writers for their gain under this harsh economic time.

“Since 1962, when lotto was introduced in Ghana, the commission paid writers are 30 percent, who then is Sammy Awuku to change our commission he’s a scammer and we will resist any form of intimidation” they added.

It will be recalled that the executive members of the lotto associations added their signature in compliance with the NLA directive to pay a 20 percent commission to its writers.

In a statement signed by the secretary of GLOA, Seth Asante Amoani entreated its members to accept the 20 percent commission noting to its members who refuse to comply with the said directives from the authority will lead to the forfeiture of their license and the banning of the operators.

“In line with the directive from the NLA, the executives and members of the Ghana Lotto Operators Association (GLOA) and Private Lotto Operators (PLO) wish to bring to the attention of its writers that payment on lotto commission is twenty percent (20%) effective 14th October 2022,” part of the statement read.