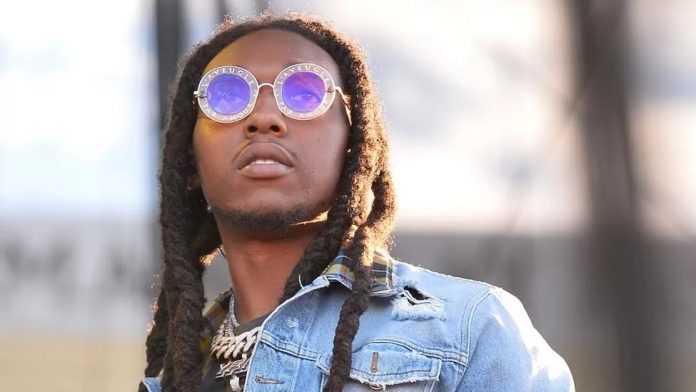 Migos rapper Takeoff was killed by a “stray bullet”, his record company has claimed in a statement.

The 28-year-old, Grammy-nominated musician died on Tuesday in a shooting at a bowling alley in Houston, Texas.

Paying tribute, his record label said in a statement: “Senseless violence and a stray bullet has taken another life from this world and we are devastated.”

Houston Police Chief Troy Finner said he did not want to speculate on whether Takeoff was the target.

He added: “Based on what people say about him, he’s well respected, non-violent.

“I would not expect him to be involved but I do want to wait on the investigation – but we have no reason to believe that he was involved in anything criminal at the time, just as people describe him as very peaceful, loving, a great entertainer.”

He pleaded with witnesses at the scene to come forward.

“Please step up, get the information to us so we can bring some closure to this family who’s hurting right now,” he said at a press conference on Tuesday afternoon.

The shooting took place at about 02:30 local time (07:30 GMT) on a balcony outside the 810 Billiards and Bowling Alley, where Takeoff had reportedly been playing dice with his uncle and bandmate, Quavo.

Police said 40 to 50 guests had been at a private party when someone opened fire. When they arrived, officers said they found a large crowd and a man with a gunshot wound to the head or neck. He was pronounced dead at the scene.

Two other people, a 24-year-old man and 23-year-old woman, were injured and were driven to hospital in private vehicles. No arrests have been made.

Police Chief Finner said “at least two firearms” were involved in the incident” and that there were “at least two individuals pulling triggers around here”.

Takeoff, real name Kirsnick Khari Ball, was one third of the chart-topping Atlanta band Migos, whose hits included Walk It Talk It, Stir Fry and Versace.

They achieved mainstream success with their 2016 single Bad And Boujee, which topped the US charts and was nominated for best rap performance at the Grammy Awards.

Takeoff did not appear on that song, saying he missed the recording session, but he was considered to be one of the key architects of the Migos sound – full of punchy vocal triplets, and sparse, stuttering beats.

Tributes to the star have flooded social media, with friends, collaborators and fans sharing their devastation over his loss.

Drake, whose remix of Versace gave the band their first taste of chart success 201,3 wrote on Instagram: “I got the best memories of all of us seeing the world together and bringing light to every city we touch. That’s what I’ll focus on for now.”

Gucci Mane, who recently collaborated with Takeoff and his uncle and bandmate Quavo on the song Us vs. Them, shared a photo of the rapper on Instagram, saying news of his death “broke my heart“.

Fellow Atlanta legends Outkast echoed the statement, sharing a photo of Takeoff with the caption: “Rest in peace, Takeoff. Sending our deepest condolences and prayers to his family, friends and community of people touched by his craft.”

Rapper Desiigner, who rose up at the same time as Migos, openly wept on an Instagram Live stream and said he was quitting rap.

Other musicians asked fans not to share videos of Takeoff’s final moments on social media.

“Delete all footage and people talkin’ about it so it doesn’t exist,” Wiz Khalifa wrote. Former Fifth Harmony singer Lauren Jauregui echoed the message, writing: “I wish this could go without saying but please do not watch or circulate that video. We’re all so desensitized to death and it’s so sad.”

Migos’ record label, Quality Control, posted a statement on Instagram saying: “It is with broken hearts and deep sadness that we mourn the loss of our beloved brother Kirsnick Khari Ball, known to the world as Takeoff.

“Senseless violence and a stray bullet has taken another life from this world and we are devastated. Please respect his family and friends as we all continue to process this monumental loss.”

Takeoff was the youngest member of Migos, who scored two number one albums in the US in the 2010s.

“I want everybody to understand the pain, the suffering of a mother,” he said. “It’s very tough.

“We all pray for his mother, his family and all of his friends who are in deep pain and shock right now.”

The power of the Migos Flow

The “Migos Flow” – a technique of rapping in short, quickfire triplets, changed the sound of popular music in the 2010s. Migos were one of the most influential groups of their generation, pioneering a style of rapping in choppy, staccato triplets known as the “Migos flow”.

You can hear it clearly on Versace, the band’s breakout hit from 2013. The band repeat the song title in rapid bursts, placing emphasis on the middle syllable at the start of every bar. Like this:

It’s a technique that can be traced back to Chuck D’s verse on Public Enemy’s Bring The Noise, and was employed by acts like Three 6 Mafia and Bone Thugs-N-Harmony before Migos came along.

But the Atlanta trio finessed and refined the style, making it the centrepiece of their sound. Their flow had an urgency and exuberance that, once heard, made other rappers sound stale.

After their single Bad And Boujee hit number one in 2017, the Migos Flow became one of the predominant modes of rapping – heard in Kendrick Lamar’s DNA, Kanye West’s Black Skinhead, Drake’s The Language and even Ariana Grande’s 7 Rings.