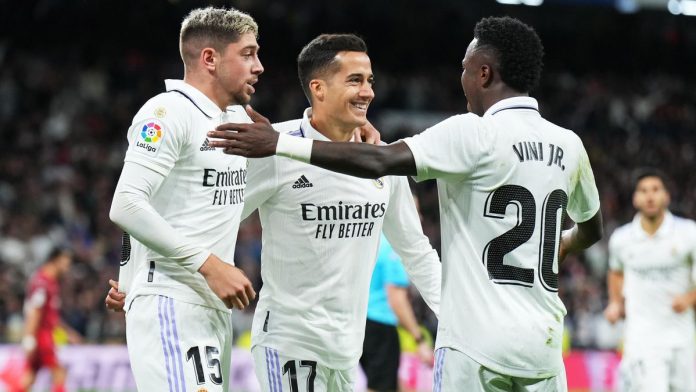 Real Madrid empathically sealed their place at the top of Champions League Group F courtesy of a 5-1 victory over Celtic at Santiago Bernabeu.

After losing 3-2 at RB Leipzig the previous week, Los Blancos required a win on matchday six to guarantee their place at the summit, and they pulled it off in some fashion.

Carlo Ancelotti’s side needed just six minutes to take the lead, Luka Modric dispatching his penalty after Moritz Jenz handled inside the box.

Fifteen minutes later, the referee was pointing to the spot for handball once again. This time Matt O’Riley was the culprit, as Rodrygo got the nod to take the penalty with the same outcome as his team-mate.

Celtic had missed chances of their own but were given a golden opportunity to pull a goal back when the referee awarded them a penalty of their own for a David Alaba foul on Liel Abada. There was no beating Thibaut Courtois though as Josip Juranovic was denied from 12 yards.

Six minutes after the restart, Marco Asensio put the game beyond Celtic’s reach, and with the visitors crumbling, Vinicius Junior got amongst the goals, finishing Federico Valverde’s cross with aplomb before Federico Valverde made it five with a sweet strike.

With six minutes remaining, Jota curled in a sublime free-kick to finally give the travelling supporters something to cheer.