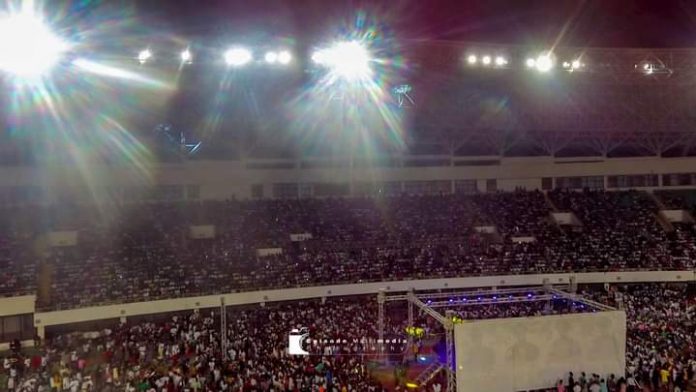 Arguably the most sought-after and biggest music export from the Northern part of Ghana Ahmed Mujahid Bello popularly known in showbiz as Fancy Gadam returned with another history at the Aliu Mahama Spotts Stadium in Tamale.

The Ghanaian music star pulled a mammoth crowd to the stadium on Saturday, October 22, 2022.

The Gadam Nation’s boss is 10 years old since bursting into the entertainment industry, entertaining fans with hit songs from back to back, delivering top-tier verses on songs he is featured on, and exhibiting his outstanding stagecraft with his choreography among others.

The concert which was titled “Fancy Gadam 10th anniversary concert” was headlined by himself and featured A-list artistes such as Nautica, Mona4Real who also happens to be a daughter of the Northern Ghana’s soil, and many pros in the North such as Fad Lan, Wiz Child, Sapashini, Ataaka among others.

Fans and music lovers from the Northern region and its environs thronged into the stadium to celebrate with the ‘Total Cheat’ hitmaker.

One could tell from the videos and photos shared on social media that, it was quite difficult to distinguish between those who paid for VIP (Gh¢50) and the regular patrons (Gh¢30) because the stadium was filled up to its brim.