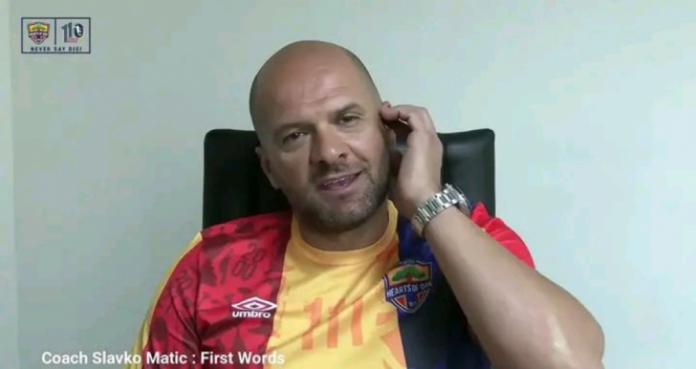 Newly-appointed Hearts of Oak head coach, Slavko Matic, has hinted that he will want the club to play attractive football.

The Serbian has signed a two-year deal with the club succeeding Samuel Boadu, who was sacked after a poor start to the 2022/23 Ghana Premier League season.

The UEFA Pro License holder is expected to at least meet the standard of his predecessor who clinched five trophies in less than two years with the Rainbow club and has already been tasked to win the league.

Speaking for the first time since his appointment, the Serbian gaffer has stated he is ever ready for everything surrounding the job and is hoping to improve the club in all departments.

He also added, they will work extremely harder to get the best out of the players by playing attractive football, scoring lots of goals, and winning trophies.

“Football is a simple game for smart people. I grew up in a big club and I know the expectations, how much big,” the 46-year-old told Hearts of Oak media.

“I like to play offensive football that doesn’t mean we will be on the attack and nobody cares about the defense.

“We should have scored more goals but this team scored only three goals in the CAF Cup and league.

“Big clubs must play attractive football, it’s not only about winning, very important is the way and how you win the game,” he added.

The 2022/23 Ghana Premier League season is still on hold after three rounds of matches due to a court injunction.

After three games played, the Phobians sit 13th on the league log with just two points.