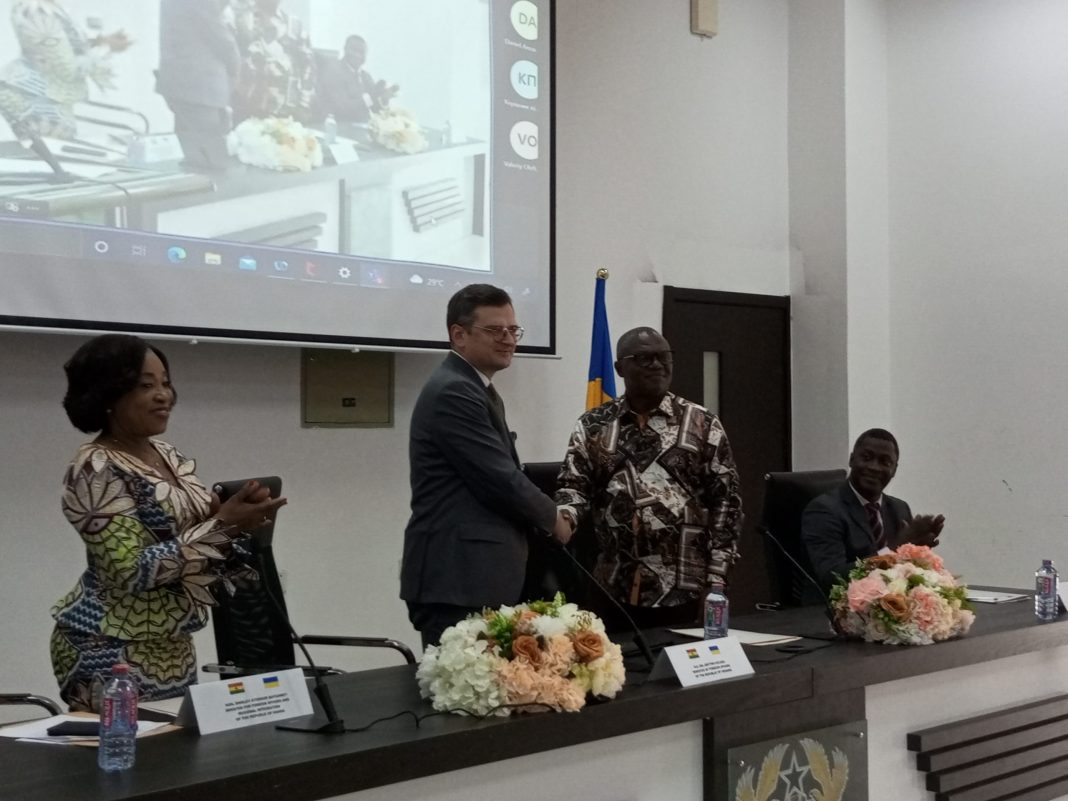 Accra, Oct 07, GNA – Ghana and Ukraine have signed two memoranda of understanding (MoU) to deepen cooperation in trade and the training of diplomatic staff.

Mr Kuleba is in Ghana to deliver a special message from the Ukrainian President, Volodymyr Zelenskyy, to President Nana Addo Dankwa Akufo-Addo.

Accompanying him is a business delegation, who would hold meetings with their Ghanaian counterparts and key government institutions, including the Ghana Investment Promotion Centre.

Prior to signing the MoU, the two ministers held discussions on issues of common interest, aimed at strengthening the bilateral relations between Ghana and Ukraine, and the need for deepening of economic ties in the areas of trade, security and education.

The discussions also focused on Ghana’s active participation in deliberations on peace and security at the ECOWAS and the African Union, including efforts to resolve regional conflicts on the continent.

Madam Ayorkor Botchwey noted that the bilateral relations between the two nations dated back to August 1992, which had been strong on the political front and emphasised the need to strengthen trade and economic ties.

She recalled the visit to Ghana 4th April 2018 by the first ever Ukrainian Trade Mission, led by Mrs Nataliia Mykolska, a former Deputy Minister for Economic Development and Trade, which aimed at enhancing trade and economic relations.

She reiterated the need for a stronger collaboration in oil and gas, petrochemicals, and security.

Madam Botchwey underscored the role of state institutions in Ghana like Investment Promotion Centre, the Free Zones Authority, the Export Promotion Authority, and the Ghana Chamber of Commerce and Industry, in promoting trade and investment.

She expressed the readiness of those institutions to collaborate with their Ukrainian counterparts to take advantage of the African Continental Free Trade Area (AfCFTA) through the conducive business environment in Ghana.

She called for an end to the Russia-Ukraine war, which was impacting negatively on the economies of many countries across the globe, including Ghana.

Mr Kuleba, on his part, commended Ghana for supporting the Ukrainian people during the United Nations General Assembly in New York, where the two countries were completely aligned on all major issues of international importance.

He said the statement: “Every bullet and every bomb fired at Ukraine is felt in Africa,” made by President Akufo-Addo at the UN General Assembly, was the clearest and the most eloquent statement, which reflected the global repercussions of the Russian aggression against Ukraine.