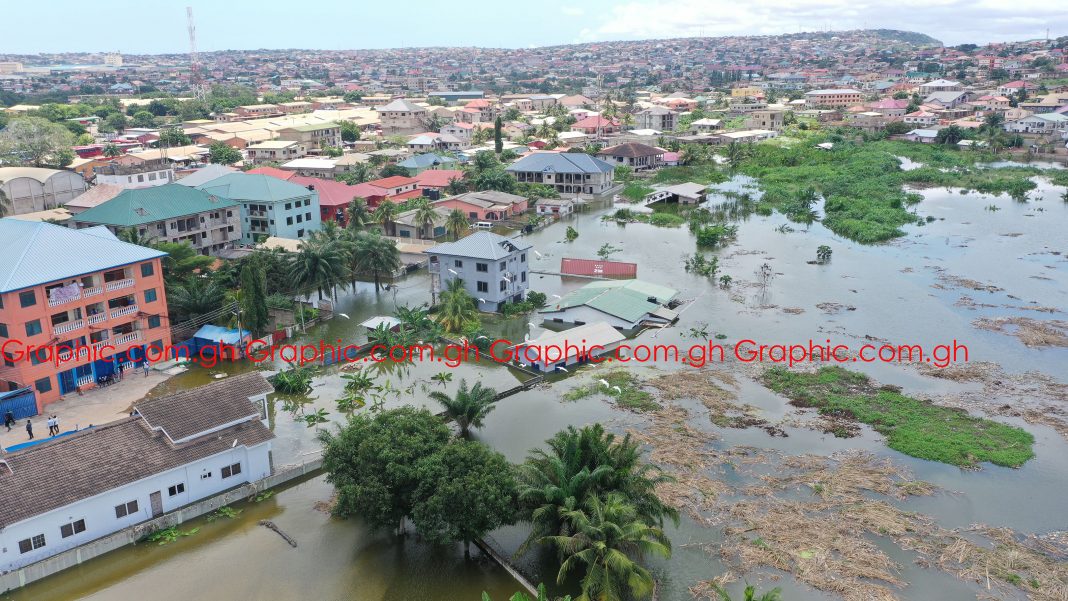 The recent rains throughout the country and the opening of the spill gates for the Bagre Dam in Burkina Faso, have caused considerable havoc to some water treatment plants in the country.

In Accra, the continuous rains especially in the Eastern Region has contributed to the increase in the water level in the Weija Dam.

The dam is currently at a level of 49.5 feet as against the maximum operating level of 48 feet. Spillage normally begins when the level gets to 46.5 feet. As a result, four spill gates have been opened to safeguard the integrity of the dam, save the dam from collapse, and save lives and properties.

The continuous rains in the country and especially in the Eastern Region in the last weeks has contributed to the rise of the water level in the Weija Dam. The opening of the four spill gates of dam has caused flooding of surrounding communities, destroying property and displacing hundreds of residents.

Affected residents have been counting their losses. Meanwhile, the Ghana Water Company Limited has explained that it had to spill the water, not only from Weija dam but from a number of dams across the country to prevent considerable havoc to some water treatment plants. The Management of the company has assured that, that despite the challenges, it is in control and have put in measures to ameliorate the situation to minimize the impact on consumers.

When Graphic Online visited the Weija are on Tuesday, hundreds of houses around had been flooded leaving many residents displaced.

The flooding has also led to the destruction of properties running in millions of Ghana cedis. They include furniture, bags, home appliances, uncompleted structures, documents and other personal effects.

Most of the affected places including the Weija Dam site virtually became tourist attractions as people trooped there to catch a glimpse of the situation after hearing of the flooding.

During a visit to some the affected areas where houses and vehicles were seen submerged in flood waters, residents, especially those affected were seen gathered in groups discussing the issue. Others were wading their way through the flood water to salvage some of their property from their homes.

Some fishermen also took advantage of the situation to cash in by charging residents ten Ghana cedis to help them retrieve some of their property.

The Unit Committee Member for Weija, Elder Amponsah Ampaw, said having lived at Weija for over 20 years, he has never seen anything like that before.

For him, there was nothing that could be done about the situation now and that his own house had also been flooded.

When contacted, the Weija Gbawe Municipal NADMO Coordinator, Adu Boahen, said the organisaton between Monday and Tuesday had been able to rescue over 25 persons who got stranded from their homes.

He said the municipal and regional organization had gone round to assess the situation and it was dire.

“Together with support from the Regional NADMO, we are at the estuary to open it to pave way for the water to flow. The situation is terrible and we are working on it,”