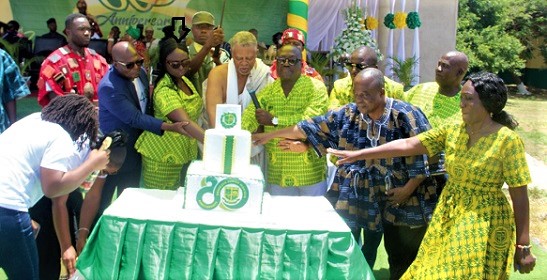 Anastasia Konadu (arrowed), the Headmistress of Ebenezer SHS, and other dignitaries cutting the anniversary cake.

The Headmistress of Ebenezer Senior High School in Accra, Anastasia Konadu, has appealed to the government and the public for support to provide more infrastructure to accommodate the growing student population of the school.

She said the current infrastructure deficit was a disincentive to quality teaching and learning, and that it did not befit its status.

Mrs Konadu made the appeal at the 15th Speech and Prize Giving Day and 80th anniversary of Ebenezer Senior High School in Accra.

Ebenezer Senior High School was established in 1941 by the late Robert Teiko Aryee as a private institution.

Mrs Konadu lamented the infrastructure deficit in the school, and appealed for the completion of a girls’ dormitory project that had stalled for over a decade to bring to fruition an objective to make the school a boarding facility.

She applauded the old students association for championing many of the projects in the school.

An old student of the school, Prof. Jonathan Ammah, of the University of Education, Winneba, highlighted the importance of education to development.

He said the school from its humble beginnings had made giant strides despite the odds by contributing to the human resource base of the country.

He stressed the need to build on the gains to accelerate development in the school.

Prof. Ammah, however, lamented the recent results of the school’s candidates at the West Africa Secondary School Certificate Examination, saying it called for immediate remedy.

He appealed to stakeholders to come on board to help to lift the school from its current |Grade C status.

He said the old students of the school had shown that they had what it would take to contribute meaningfully to development aspirations, stressing the need for more support to harness such potential.

He also challenged fellow old students, also known as Paduans, to reignite their effort towards facilitating the development of their alma mater.

The school prefect, Collins Frimpong, urged parents to take keen interest in the academic activities of their wards, saying many parents often shirked such responsibility.

He noted that education was a bedrock that could spur development, and that it was, therefore, incumbent on stakeholders to identify this critical element and spare no effort at pursuing this quest.

The Headmistress cut the anniversary cake.

There was also an exhibition by the students to showcase their talents.