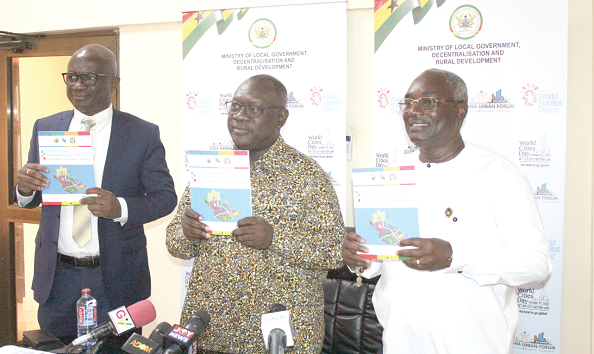 O.B. Amoah (middle), Deputy Minister of Local Government, Decentralisation and Rural Development, with Dr Kodjo Mensah-Abrampah (right) and Abdulai Abanga, Deputy Minister of Works and Housing, after the launch of the 2022 report on the implementation of the New Urban Agenda in Accra

World Habitat Day was commemorated in Accra yesterday with the launch of the maiden progress report on the implementation of the UN New Urban Agenda.

The agenda represents a shared vision that provides guidance on how well-planned and well-managed urbanisation can be a transformative force to accelerate the achievement of the sustainable development goals (SDGs).

It focuses on delivering a future that offers access to equal rights and benefits and opportunities offered by cities.

Ghana, like all UN member states, in 2016 consented to the agenda, known as ‘the Quito Declaration on Sustainable Cities and Human Settlements for all’.

The UN has designated the first Monday of October as World Habitat Day to reflect on the state of global habitats, the basic right of all to adequate shelter.

It offers a platform for global reflection on the state of towns and cities and also reminds the world of its collective responsibility for the future of the human habitat.

The commemoration, which was on the theme: “Mind the gap. Leave no one and place behind”, also seeks to draw attention to the growing inequalities and vulnerabilities that have been exacerbated by the triple ‘C’ crises — COVID-19, climate and conflict.

It was under the auspices of the ministries of Local Government, Decentralisation and Rural Development and Works and Housing and the National Development Planning Commission, in collaboration with the UN.

The progress report stated that within the implementation period, access to basic and safely managed drinking water services had improved overtime, while housing deficit in units had decreased from two million to 1.8 million.

“The 2021 Population and Housing Census (PHC) shows that, nationally, nine in 10 households (92 per cent) have access to improved sources of drinking water.

The statistics are tilted favourably towards urban dwellers, where 97.8 per cent of households have access.

“For both periods, access to toilet was higher among urban households than rural households, while open defecation declined by 2.3 percentage points to 17.7 per cent in 2021,” the report added.

It recommended that the government should implement more affordable housing schemes to improve access for low to middle-income earners.

In a joint press statement read by a Deputy Minister of Local Government, Decentralisation and Rural Development, Osei Bonsu Amoah, the collaborating agencies said the country, like many parts of the world, was experiencing a life-changing phenomenon through urbanisation.

“As we celebrate the Urban October and World Habitat Day, we recommit to make our cities and towns inclusive, safe, resilient and liveable,” he added.

In a speech read on her behalf, the Executive Director of UN-Habitat, Maimunah Mohd Sharif, said tackling urban poverty and inequality had become a global priority.

The Minister of Works and Housing, Asenso-Boakye, in a speech read on his behalf, said housing was a basic need of everyone, and that by convention, every citizen had the right to adequate shelter.

Gold for oil: Mining firms directed to sell 20% for petroleum