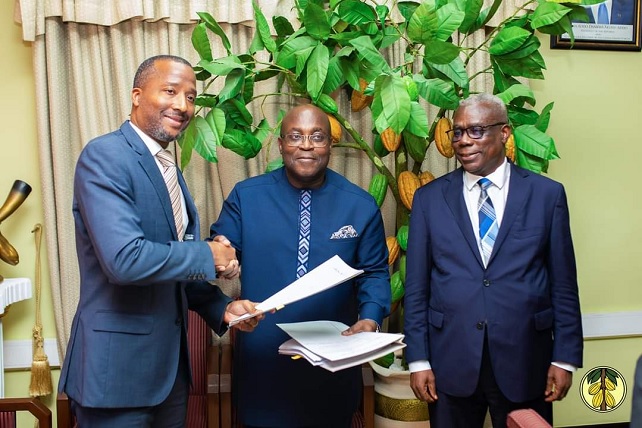 Ghana Cocoa Board (COCOBOD) has signed a $1.13 billion pre-export syndicated loan agreement with international banks to finance beans purchases for the 2022/23 season.

The Receivables-Backed Trade Finance Facility (Syndicated Loan) will help in the purchase of cocoa and finance other industry costs within the crop year.

Chief Executive of COCOBOD, Joseph Boahen Aidoo, explained that despite the challenges facing the cocoa sector, brought on by the global financial difficulties, the sector has once again shown leadership.

He assured the lenders of the effective and efficient use of the funds.

For his part, the Minister for Finance, Ken Ofori-Atta, also said the signing puts the nation’s finances in the right landing zone and gives impetus for optimism in the Ghanaian economy.

The finance facility is between Cocobod and a consortium of banks and financial institutions with the government as the guarantor.

Parliament approved the loan in July, despite efforts to overcome an economic crisis and a nearly $2.5 billion balance-of-payments deficit.

Ghana’s Cedi currency has been greatly affected this year, having lost about 30 percent of its value against the dollar in that period.

Cocoa production in Ghana is down sharply this year, seen at 689,000 tonnes on September 1 after a previous forecast of 800,000 tonnes. This has prompted the International Cocoa Organization (ICCO) to upwardly revise its forecast for a global cocoa deficit.

The lower yields partially result from farmers using less fertilizer due to Covid 19 pandemic, with prices having increased worldwide due to high energy prices and supply disruption caused by Russia’s invasion of Ukraine.