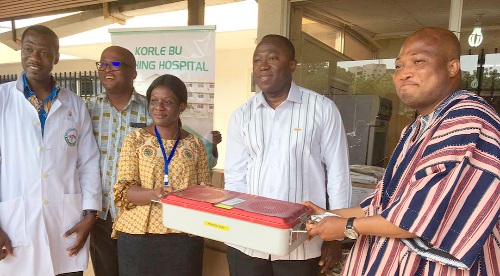 The National Democratic Congress (NDC) Member of Parliament (MP) for North Tongu in the Volta Region, Samuel Okudzeto Ablakwa, has presented medical equipment and supplies to the Neurosurgery Department of the Korle Bu Teaching Hospital (KBTH) in Accra.

The items were part of a consignment initially procured to support the construction of the second surgical theatre at the Saint Anne Polyclinic at Tagadzi in the North Tongu Constituency in a collaborative effort by the MP, Supplies Oversees — a non-governmental organisation — and the Catholic Diocese of Keta-Akatsi.

This was the culmination of a fulfillment of a commitment made in 2018 by Mr Ablakwa to furnish the ongoing construction of the surgical theatre in his constituency.

Because the medical supplies were more than enough for the medical facility in his constituency, it became necessary for them to be distributed to other health facilities, including the Ho Teaching Hospital and the KBTH.

He further mentioned that, as a result of certain limitations with healthcare delivery at hospitals at the district and regional levels, the donation to KBTH would help to vamp medical assistance in the country since the most complicated of health issues were referred there.

The Chief Executive of KBTH, Dr Opoku Ware Ampomah, expressed gratitude to Mr Ablakwa for the equipment, and further encouraged other political heads, corporate institutions, and non-governmental organisations to emulate the gesture.

He further revealed that KBTH would be celebrating its centennial in the coming year, and that it should be an opportunity for all to reflect on the most effective ways to get the hospital to serve the entire populace.

The Head of Surgery at KBTH, Dr James Edward Mensah, reiterated the need for more assistance from the public for the surgery department to improve healthcare delivery and make medical assistance affordable to the ordinary Ghanaian.