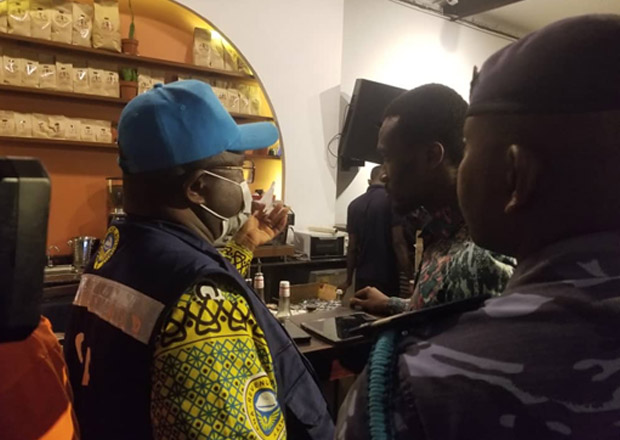 Officials of GRA inspect the Alley Bar in Osu

THE GHANA Revenue Authority (GRA) has intensified its Test-Purchase exercise as some managers of registered Value-Added Task (VAT) businesses have been handed over to the Criminal Investigations Department (CID) of the Ghana Police Service for investigations into non-compliance with the country’s tax law.

In September, managers of facilities such as Champion Dishes, a Restaurant at Adabraka, Grace Has Found Us, and Celeb, all at Dansoman were found not to be issuing the Commissioner-General’s invoice.

According to the Head of Enforcement Management, GRA Accra Central, Joseph Annan the defaulters have violated the Value Added Tax Act, 2013 (Act 870) and were therefore handed over to the CID of the Ghana Police Service for investigation.

“After our investigation, most of the defaulters have started complying with the GRA’s regulations and have paid the amount owed to the authority. They were further cautioned not to engage in the act again or will be prosecuted immediately when found guilty” he said.

The authority as part of measures to achieve the revenue target for 2022, last Friday embarked on a night patrol on the principal street of Osu to issue an arrest warrant to managers of the Alley bar for non-issuance of the Value Added Tax (VAT) invoice.

Addressing the media after the exercise, Mr. Annan indicated that the authority has decided to embark on night patrol exercises to prosecute the tax defaulters who don’t operate during day time.

“It seems some of the tax defaulters have taken advantage of the authority because we don’t operate at the night. But I have a piece of bad news for them because the authority is bent-on ensuring that every business operating in this country complies with the country’s tax law, so we will be embarking on more night patrol” he said.

Mr. Annan reiterated the authority’s commitment to ensuring that business owners pay their taxes and issue tax invoices in their business operations.

“And to those who have not registered to immediately do so to prevent any inconveniences when the authority invades their business place to issue an arrest” he advised.