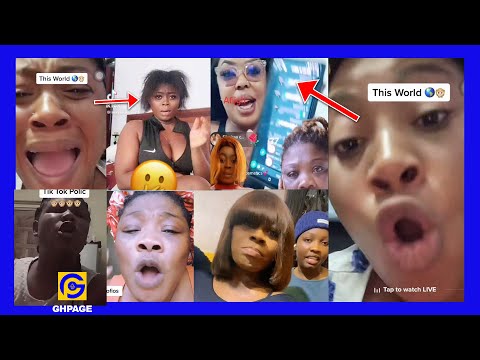 The young lady behind the viral audio of Maa Linda’s daughter confirming to be a hook-up girl has finally spoken.

The lady identified as Sarpongmaa indicated that she recorded her conversation with Rocklyn Osei (Sexy Journalist) where she confirmed being a hook-up girl.

According to Sarpongmaa, she only sent the audio to their mutual friend known as Abigail Kwarteng, who eventually forwarded it to friends and Afia Schwarzenegger.

She then apologised to Maa Linda for tarnishing her daughter’s image and also betraying her trust.

Recall that about a week ago, Afia Schwar alleged in a video that Maa Linda’s presenter daughter, Rocklyn, is an upgraded prostitute who does hook-up to survive.

Maa Linda and her daughter came out to deny the allegations but a new audio that has landed on the internet confirms Afia Schwar’s accusations.

In this wild audio that has given Afia Schwar and Maa Linda’s beef a new twist, a friend believed to be Rocklyn’s friend in the hook-up business sent a voice note to the radio presenter to be very careful because all eyes are on her now following Afia Schwar’s accusations.

In Rocklyn’s reply to her friend, she claimed that she has even stopped the hook-up business because she was nearly caught by her boyfriend some time ago and that nearly led to the collapse of their affair.

Below are some comments from social media users;

SOB wrote; “The girl wasn’t smart for sending the audio. It was a trap they set her”.

Doreen Dompreh stated; “Afia have no right to talk about the girl been a hookup, de girl is not married so is normal. Afia was married but was caught having sex with another man so she herself is an old hookup and still doing it, so she should shut up”.

George Johnson said; “So sarpoma,why didnt you call sexy journalist and confront her ,if she have said something”.

N.A commented; “You’re not even ashamed of what you’re doing smh It’s a shame . I pity men who go for these women”.

Ruth Adobea had this to say; “Youth n d future leaders of Gh. Al because of money and fame. Are they not in school, can’t they be in school. What is all this, where are their parents eii boi”.