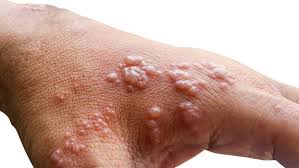 The majority of the cases, according to Dr. Charity Sarpong, were reported in localities inside the Accra Metropolitan Assembly, according to citinewsroom.com.

According to the director, “33 percent of the cases were documented in the Accra city,” according to citinewsroom.com.

In June 2022, five instances of monkeypox infections were reported in Ghana after 12 suspected cases were looked into in response to the disease’s global epidemic.

The infection claimed the life of a member of the Ghana Armed Forces in the Upper East Region in August 2022, according to the GHS.

Dr. Patrick Kuma-Aboagye, Director-General of the Ghana Health Service, claims that monkeypox is a zoonotic illness brought on by the monkeypox virus. According to him, it is indigenous to Nigeria and Cameroon and spreads either through diseased humans or infected animals (such as squirrels, rats, dormice, monkeys, etc.).

He said that there are several ways in which the virus may spread to people, skin-to-skin contact, face-to-face contact, mouth-to-skin contact, and touching bedding, towels, clothes, or other items used by an infected person.

Content created and supplied by: Tbprinz (via Opera
News )

Hearts of Oak Set to Lose Another Big Player This Week